Garvin, Harris brothers net goals in 3-1 taming of the Bulls 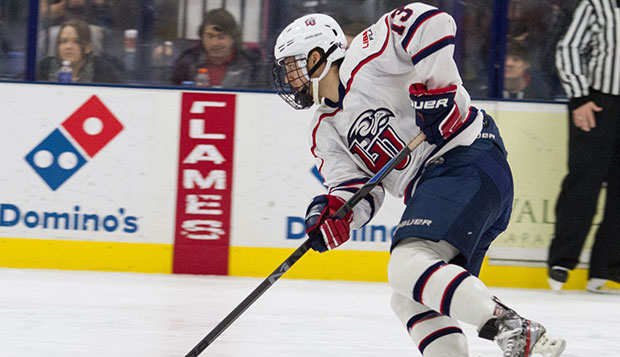 Junior defenseman Chase Harris scored the Flames' final goal on an empty-netter after his younger brother Owen, a freshman forward, put Liberty up 2-0 with the first goal of his career early in the second period.

Overall, Handy was happy to come away with a win in Liberty's first-ever clash with the Bulls, but not altogether satisfied with the performance by the 11th-ranked Flames, who evened their record at 2-2.

"We didn't fully execute our system tonight," he said. "We kind of got away from playing the way our team wants to play. We weren't at our best and weren't executing. We didn't play up to our standards. There were moments where it was there and moments where it wasn't."

He is glad the Flames will have another chance to work out some of those kinks in Saturday night's game at nearby Niagara, starting at 7:30 p.m.

"We're excited for another opportunity to play on the road," Handy said. "We'll have to straighten things out and be intentional for three periods, 60 minutes of play. We did get the W and want to build off of that. At the same time, we want to make some adjustments and improve. We're going to take the positives and be a better team."

Junior forward Grant Garvin ended a scoreless tie against the 16th-ranked Bulls (5-2-1) just 18 seconds after the second-period faceoff, won by the Flames. Freshman defenseman Zane Schartz and sophomore head captain Ben Hughes assisted Garvin on his team-leading fourth goal of the season, from a tough angle in the corner.

"He's got a hot hand now," Handy said of Garvin.

Owen Harris netted his first goal as a Flame less than three minutes later on a putback of a shot by fellow freshman forward Michael Bunn.

After Buffalo finally got on the scoreboard with eight minutes remaining in regulation, cutting the deficit to 2-1, Harris' older brother — junior defenseman Chase Harris — sealed the victory with a long-range shot into an empty net.

The Bulls outshot the Flames 32-26 for the game, but Liberty emerged with the win thanks in part to Halpenny.

"Josh had a solid game," Handy said. "We have confidence in all three of our goalies. (Junior Matt) Pinel is going tomorrow."