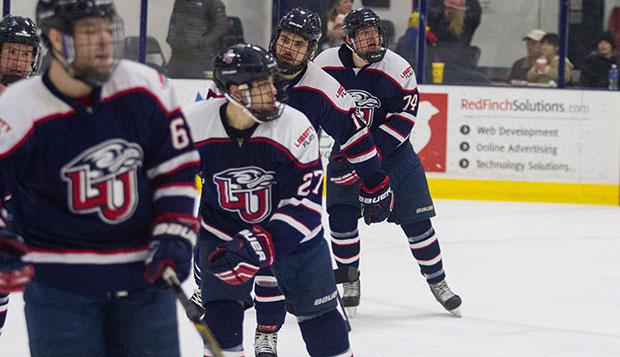 Liberty University's ACHA Division I men's hockey team slipped to No. 11 in this week's ACHA computer rankings, but is still ranked higher than the two opponents it will face this weekend — No. 16 Buffalo and No. 14 Niagara.

"We have a great opportunity to go up to Buffalo and play two quality teams," Flames Head Coach Kirk Handy said. "We really don't know a whole lot about them. For us, it's all about what we're doing and trying to take our team game to the next level. We have built on some good momentum from the second game at Minot, got some line combinations together, tweaked some things, and had a couple good video sessions from that, and we're ready to go."

On Thursday, the Flames will scrimmage with a team from the Clarence Mustangs in nearby Lockport, N.Y., that has connections with former Liberty assistant coach Jake Hannon, now a Fellowship of Christian Athletes (FCA) regional hockey representative in Buffalo.

Former Philadelphia Flyers defenseman Marc-Andre Bourdon, a first-year assistant coach with the Flames, and a couple players from both teams will share their testimonies afterwards.

"They are going to share about our faith and about Liberty and most importantly what God's doing in our lives," Handy said. "It's a good way for us to connect with Jake and the FCA group up there."

Freshman forward Michael Bunn scored two of his three goals on the season— including the equalizer in the closing minute — in the second game at second-ranked Minot State, a 7-6 overtime loss, on Oct. 4.

Buffalo scouting report: The Bulls, who lead the Northeast Collegiate Hockey League standings, have ridden the momentum from advancing to the ACHA DI National Championships for the first time in more than a decade last season. They won the NCHL regular season and were ranked No. 17 before being eliminated in the first round by the 16th-ranked Colorado Buffaloes, 4-3.

They are paced in scoring by forwards Willie Sanchez and Robert Lang, who have each scored 10 points, as well as Richard Ledyard and Gavin Evancho (seven points).

The Bulls are coming off a 5-3 victory over conference rival Canisius College and a 7-1 rout of Penn State-Berks last weekend. That snapped their two-game skid against No. 15 Rhode Island and No. 19 Colorado State, which won in overtime.

On Saturday, Buffalo will host Davenport, the team the Flames play twice next weekend in the grand re-opening of the renovated LaHaye Ice Center.

Niagara scouting report: In 2013, the Purple Eagles went 18-0 in the regular season only to blow two four-goal leads in an 8-7 double-overtime loss to Buffalo in the NCHL tournament championship game. They advanced to the ACHA DI National Championships in 2014 and returned last year with an autobid after capturing the NCHL regular-season and tournament titles, when they claimed their first-ever national tournament triumph before losing to eventual national champion Central Oklahoma.

This season, Niagara is 3-1 at home after being swept by sixth-ranked Adrian College in its only away series of the season. It has posted routs over Rhode Island (6-2) and a season-opening shutout of Duquesne (4-0) before dropping its first home game against Canisius this past Saturday, 6-5.

In goal, junior Mike Parda, Niagara's defensive player of the year last season, has logged all 420 minutes to date, recording a 3.00 GAA and 91.4 SP.

Coaches: Handy is in his 16th season as the Flames' head coach and has compiled an overall record of 334-141-20. Now in his 18th season, Niagara's Larry Brzeczkowski is the second-longest-tenured coach in the ACHA and a two-time ACHA coach of the year selection, most recently in 2014. Sal Valvo is in his sixth season as Buffalo's head coach.