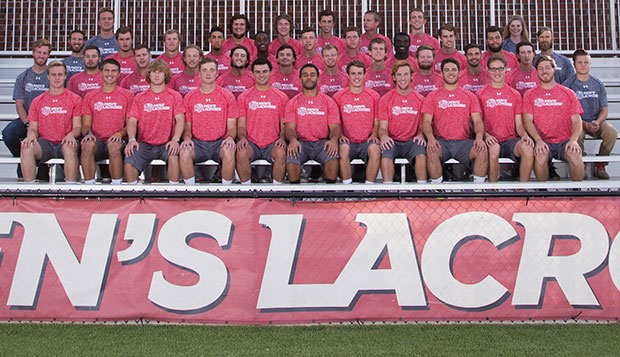 After six weeks of practice and conditioning, Liberty University's men's lacrosse team is more than ready for some live action at this Saturday's Fall Tournament, featuring six games between three teams at the Liberty Lacrosse Complex.

"We started practice in early September and have had a month and a half of practicing and lifting," Flames Head Coach Kyle McQuillan said. "Fall ball not as much fun (as the MCLA season in the spring). There's a lot more work and effort put in compared to what you're getting out of it, since there's not as many games. I know the guys are looking forward to getting to play this weekend."

Liberty will open tournament competition at 10 a.m. against cross-town rival Randolph College, an NCAA Division III program, before challenging MCLA Division I Northwest Region rival George Washington University at noon and concluding the tournament against the University of Richmond's club team at 3 p.m.

"We want to focus on things we've been working on for the past month and a half and approach each one as if they were the most difficult opponent we will be facing," McQuillan said. "Fall ball is a good time for us to be able to start developing that mentality, not changing way we play based on our opponent. Regardless of our opponent, we want to come out and play our game and our style and the rest will take care of itself."

The Spiders will face the Colonels at 11 a.m. before Randolph plays Richmond at 1 p.m. and GWU at 2 p.m. Games will start on the hour and feature two 25-minute halves with a running clock.

"We want to maximize the opportunity we have to play some other teams and get as much game time as we can," McQuillan said. "Teams can hold warmups on other fields and get right into their games."

He hopes to be able to continue to attract high-level competition to Lynchburg in future Liberty Fall Tournaments.

"This weekend, the University of Colorado, the MCLA Division I runner-up, will be scrimmaging Denver, the NCAA Division I national champion," McQuillan said. "So hopefully, in years to come, we will be able to get Richmond's NCAA Division I team to come play us, and Virginia and some of the other teams at the NCAA level."

The next month will be extremely busy for the Flames. Next Friday, over Homecoming Weekend, Liberty will hold its annual Alumni Game at the Liberty Lacrosse Complex before traveling to Blacksburg for a scrimmage against defending SELC Division I champion and MCLA Final Four qualifier Virginia Tech on Friday, Oct. 30 at 6 p.m.

Then, on Friday, Nov. 6 at 6 p.m., over College For A Weekend, the Flames will host a Navy & White intra-squad scrimmage to give an incoming group of 30 potential recruits a chance to see Liberty's current players and the level they are competing at right now. Finally, on Saturday, Nov. 7, at 11 a.m., McQuillan and his staff will host a combine on the same fields, putting the visiting players through tests and drills and having them compete in a scrimmage of their own.

"Our recruiting specifically within the past couple years has really taken off," McQuillan said. "This past season brought in about 10 freshmen, making it by far our biggest and best recruiting class. We'll have a lot of really good players coming in (for CFAW) and we're excited about having them come in and experience Liberty lacrosse firsthand."

McQuillan is equally interested in seeing how his returning players and incoming freshmen fare this weekend, with a full 35-man roster competing for 10 starting spots.

"We've only been able to watch a few of the new players in live games, so for most, this will be the first opportunity for them to play in front of our coaching staff," McQuillan said, noting the coaching staff will be making some decisions about positional rotations for when the spring season starts. "We've told them ‘If you want to move up on that depth chart, this weekend is a good opportunity to show what you've learned and the things you've been able to pick up on and implement.' This tournament will show us which guys are gamers and who will be able to step up and play big roles this season."