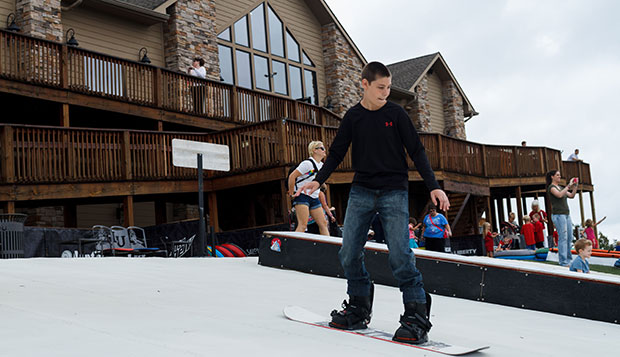 The Liberty Mountain Snowflex Centre will be the site of Saturday's first Virginia Commonwealth Games ski and snowboard competition this Saturday, with registration open at 10 a.m. and the contest set to start at 1 p.m.

Last week, Liberty University was named the title sponsor and primary location for the 2016-20 Virginia Commonwealth Games. This Saturday, Liberty Mountain Snowflex Centre (LMSC) will host one of the final events of the 2015 Games — a ski and snowboard rail contest starting at 1 p.m. on the lower slope.

"This is the first year the Commonwealth Games have ever had a ski or snowboard contest," said Drew Sherwood, LMSC's general manager, who is expecting as many as 40 or 50 contestants from all over Virginia and even a few from North Carolina, which did not offer a skiing or snowboarding competition in its state games. "We've never hosted a beginner's competition at Snowflex — they've been more intermediate and advanced. We're hoping, because it's a beginner event, it appeals more to the student body as well as the community who won't have to compete against professional ski or snowboarders."

There is no online registration available, but competitors can sign up from 10 a.m.-noon with warmups scheduled from 10 a.m.-1 p.m. Cost is $5 per entry in men's and women's, open and beginner, ski and snowboard divisions. Gold, bronze, and silver medals will be provided by the Commonwealth Games for the top three finishers in each division.

Three to four features will be set up on the beginner's slope, which may be rearranged for each level of competition. Riders will take five runs in a span of 20-30 minutes and be scored on their top two, with point totals based on the difficulty of the tricks and how cleanly they are executed from the start to the finish of each run.

"It's going to be a trial event to try to see how much interest there is," Sherwood said. "Hopefully, we can get a lot of people out to participate and to spectate. We're doing it on a smaller hill, like we do with the LaHaye Rail Jam. It's something that will be safe for them, not too big, but not too small that it's not going to look good for them and the spectators. If there is enough interest, we'll keep doing it and next year, we might add events or change the event format."

Next year, the upper slopes could be incorporated into the competition, which may be scheduled for the summer or winter, rather than the fall. This weekend's event was originally planned for Sept. 13 and then Oct. 3, but was rained out on both dates. The 2015 Commonwealth Games' skateboarding competition was held for the first time at the Liberty Mountain Skate Park on Sept. 13.

This Saturday's rail contest will be the only competition scheduled at Snowflex this fall, and the Snowflex Games, held for the past several years in the spring, have been scratched from next semester's schedule.

Though most of Liberty's ski and snowboard team are not planning to enter the competition, Leeds and Sherwood are recommending that new team members do compete to get ready for United States Collegiate Ski and Snowboard Association (USCSA) freestyle competitions this winter.

"The returning team members are on the terrain park right now, to train as a team to get ready for actual collegiate contests coming up," Sherwood said.