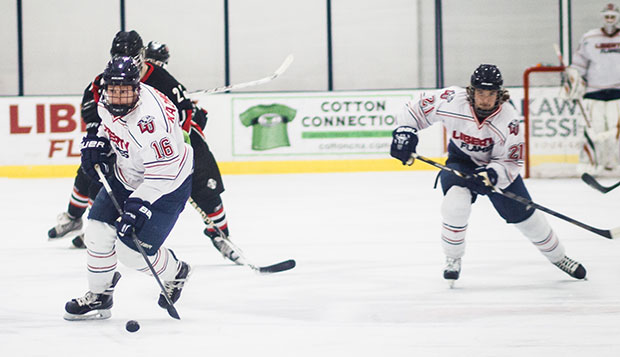 Peter Kazmierczak (left), trailed by fellow junior forward Jordan Barstead (right), assisted the Flames' first goal and scored their second to tie Saturday's game twice against the Cardinal in the second round of the Louisville Showcase.

Three goals in a two-minute span of the second period gave Liberty University's ACHA Division II men's hockey team the momentum it needed to overcome a slow start, Saturday night in the second-round game of the Louisville Showcase at the Iceland Sports Complex.

The Flames (4-0) turned a tie game into a 5-2 advantage by capitalizing on two power-play goals two minutes apart and scoring one more in four-on-four action a minute later en route to a 6-3 victory.

"The second period was definitely the best period we played tonight," said Liberty junior forward and alternate captain Peter Kazmierczak, who scored his first goal of the season unassisted midway through the third to tie it at 2-2. "We went from probably one of the worst periods in the first to one of the strongest periods we've played this year so it was a good character check."

Junior forward Ben Freymond, who had tied the contest at 1-1 off assists from junior forwards Devon Docksteader and Kazmierczak midway through the first period, netted the go-ahead goal on a power play assisted by graduate forward Christian Garland with 7:46 left in the second. Junior forward and head captain Paul Ingles then finished a feed from Roger Roulette on a man advantage with 6:46 to go before fellow junior defenseman Ryan Sidun pushed the lead to three goals at the 5:47 mark off assists from forwards DJ Dinnison and Ryan Kerr.

"The unique thing about this team is whoever is put out there, you can trust they're going to get the job done," Kazmierczak said. "Our fourth line can skate with our first line and we all want to do what we can with the talent we've been given and do it in a way that would glorify God."

Louisville pulled back within 5-3 early in the third period before Docksteader capped the scoring off assists from Ingles and Sidun with 3:07 remaining in regulation.

"They played well," Lowes said of the Cardinal. "They gave us a good challenge and had a lot of energy. They proved they could execute and have a log of offensive potential."

Sophomore goalie Connor Carew won for the fourth time in as many starts for the Flames this season.

"They had some chances and scored on two consecutive odd-man rushes, but Connor played well," Lowes said.

The Flames conclude play in the Louisville Showcase with a game against Davenport, a late replacement for DII power Florida Gulf Coast University, on Sunday at 10:30 a.m.

"All four teams are at this showcase for a reason, because they're strong," Kazmierczak said. "Davenport lost both games they've played so far, but watching them, they're a very strong team. We'll be rolling three lines and putting fourth line out there when we need a spark, trusting our depth and trusting our coaching. The leadership we have on this team won't allow us to go half-hearted."