Lady Flames shut out Huskies in ACHA opener in Boston 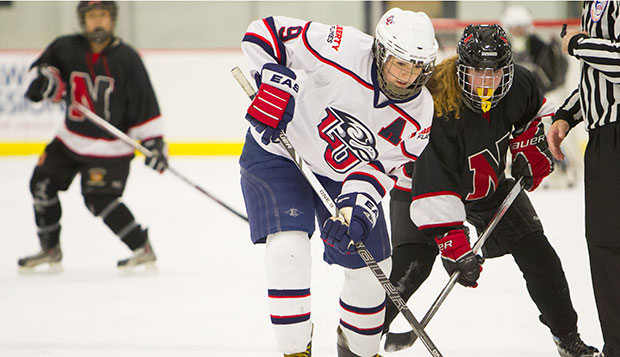 Liberty graduate student and forward Nikki McCombe battles for possession of the puck in a contest against Northeastern played Feb. 1, 2014 in the LaHaye Ice Center.

The Lady Flames (1-1-1), who lost and tied exhibition games at the Washington Pride two weeks ago, pulled away for a 5-0 victory over Northeastern in their ACHA opener played in the arena that has served as home to the Huskies' hockey program since its inception in 1929.

"It was neat, and nostalgic to play in an arena like that," Lady Flames Head Coach Paul Bloomfield said. "It's old, and located in an historic part of Boston. They've had some good hockey played there."

Northeastern (0-3) won the ACHA DI women's title five years ago, but is not ranked in the top 10 of the ACHA DI poll, revealed during a Preseason Show hosted by LFSN.

After a scoreless first period, senior forward, head captain, and last year's leading scorer Carrie Jickling gave the second-ranked Lady Flames a 1-0 lead just over a minute in to the second off an assist from sophomore forward Chelsey Greenwood. Less than a minute later, freshman forward Lauren McDonald put Liberty up 2-0 off assists from sophomore forward C.J. Tipping and Greenwood.

Then in the third, the Lady Flames added three more goals — the first two by junior forward Courtney Gilmour with 13:46 and 9:07 remaining set up by Jickling, with secondary assists from senior forward Catherine Burrell and Tipping, respectively. Greenwood capped the scoring with 1:06 to go, assisted by freshman wing Lauren Pillisch and freshman goalie Kelly Hutton.

"We got off to a very slow start, and you could tell it took them a while to get legs under them, which is typical after a long bus ride," Bloomfield said. "We had a lot of the penalties that were results of being tired. But in the third period, the girls played really well and the score showed it. We cycled the puck a lot better."

Liberty outshot Northeastern 48-27 for the game and Hutton made 27 saves in her first start in goal.

"We wanted to get her going and thought this was a good game to get her started," Bloomfield said. "She wasn't pressured a lot, but we didn't play very well in front of her in the first period and she made two or three good saves."

Sophomore goalie Rosie Kelly is expected to start between the pipes for the Lady Flames when they challenge Rhode Island at Brad Boss Ice Arena on Saturday at 7 p.m. and again on Sunday at 11 a.m.

"Rhode Island has historically had a pretty good team," Bloomfield said, noting it won the ACHA DI title in 2012. "They've always been contenders, but they had a new coach last year and have been in rebuilding mode. They have two phenomenal players this season."