Racquetball still recruiting as it readies for first event 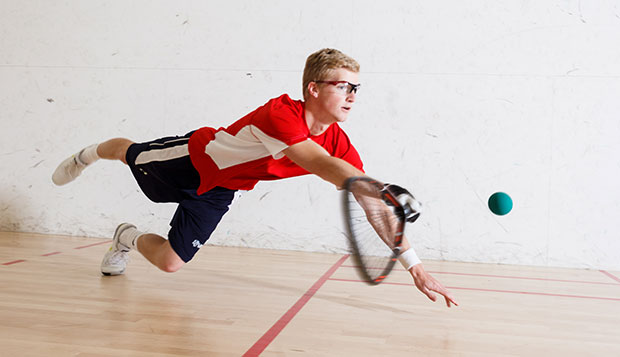 Flames senior Eric Piering dives for a shot during practice at The Sports Racket before last spring's USA National Championships in Tempe, Ariz.

Liberty University's racquetball Head Coach Danny Rodriguez is always looking for more student-athletes to join his Club Sports program, and this season he is in desperate need of women, in particular.

"We're always recruiting, always asking for people to join," Rodriguez said. "We ask for whoever has a desire to play and we train everybody. You don't have to know racquetball at all. Racquetball is one of the easiest sports to learn, though as you get better, as they improve day by day, it gets more difficult."

After fielding a full team of five women last year, the Lady Flames are left with just one active female player on this year's roster — senior Level 3 player Morgan Drake.

"We don't have the size of team we had last year, when we had 21 players," Rodriguez said. "We have seven guys this year and only two women, and one has a knee injury."

That, unfortunately, is sophomore Sadie Abromowicz, who will receive the Mid-Atlantic Collegiate Racquetball Conference (MACRC) Women's Player of the Year award based on last season's performance when Liberty hosts the season-opening MACRC tournament this Friday through Sunday at The Sports Racket in Lynchburg, Va.

While his numbers are down, Rodriguez is expecting the largest turnout for any tournament Liberty has hosted, with 60 players already registered. They will come from regional schools including James Madison University, the University of Virginia, and defending MACRC champion University of North Carolina-Chapel Hill, which plans to enter two teams with eight men and eight women on each.

On the men's side, the Flames should be competitive, returning two Level 1 singles players with national experience — seniors Eric Piering and David Schreck, who will also form their top doubles tandem.

Liberty's third most experienced returnee is junior Pablo Jaramillo, a Level 2 player who will team up with Level 3 sophomore Jacob Semeral for doubles play.

This weekend's event, which starts Friday from 3:45-9 p.m., continues Saturday from 9 a.m.-9 p.m. and concludes Sunday afternoon, is the first of four MACRC tournaments. The collegiate format features four levels, I through IV, each with gold, blue, red, and white divisions.

"If you win in gold, you stay there, and if you lose, you drop down to blue or red and then white divisions," Rodriquez said.

Championships will start Saturday night and Level I finals are set for Sunday afternoon. Live results will be posted throughout the weekend with team scores finalized next week.

Rodriguez planned to enter the open division along with assistant coach Shawn Furman, but not enough coaches from other programs have signed up to form a complete bracket.

The Flames will also host the second MACRC tournament at The Sports Racket from Oct. 30-Nov. 1 before traveling to JMU Nov. 13-15 and UNC Jan. 29-31. Liberty may then send players to the USA Racquetball Collegiate Nationals at Arizona State University in Tempe, Ariz., in March, as it did for the first time last season.