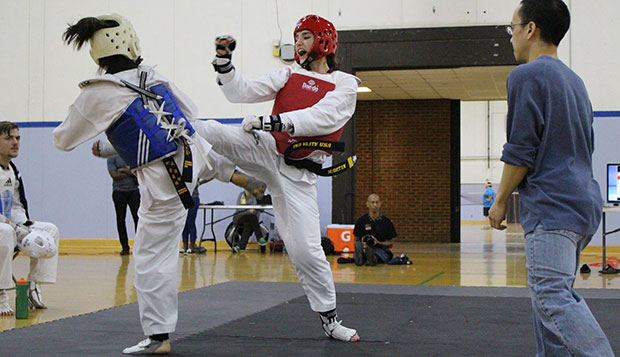 Moriah Martin, a sophomore from Alaska, was one of five champions at Saturday's Atlantic Collegiate Alliance of Taekwondo opener hosted by the University of North Carolina. (Photo courtesy Shannon Gallagher)

"The storm did keep some schools away, however there were over 50 competitors from UNC, the University of Virginia, Virginia Tech, American University, and Liberty," Flames first-year Head Coach Tom Childress said. "We took 17 athletes to compete and four team members who assisted in running the tournament throughout the day."

Liberty will now focus on preparing for the West Point Invitation Tournament on Oct. 22 and the first Pan American University Championships, Oct. 23-25 at the United States Military Academy in West Point, N.Y., where a select group of its athletes will have the opportunity to showcase the sport before an NCAA sanctioning body.