Night after being shut out, Flames extend Minot to shootout 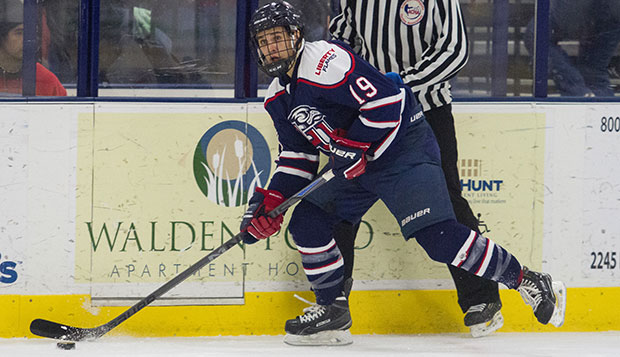 Liberty forward Tyson Street skates along the boards in the first game of a sweep of Minot State, Feb. 20 at the LaHaye Ice Center.

Though they wound up taking a 7-6 shootout loss after giving up two two-goal leads, the Flames (1-1-1) showed they were no pushovers against a team that advanced to the ACHA DI National Championships Final Four for the fourth time in a row last season after capturing the crown in 2013.

"We had to kind of move on from that first game," Liberty senior forward Tyson Street said, noting home-ice advantage helped the Flames sweep the Beavers last year. "It's always tough coming here and playing in their rink, just like it is for them playing in ours. Coming into today's game, we wanted to eliminate the turnovers on both lines and get the puck deep in their zone, to just keep pressuring them and be defensively sound and not make any mistakes in our own zone."

Just over two minutes into the second period, Bryce Lipinski beat Byron from a tough angle on the right side after the puck was played around the back of the net.

"We battled back two or three times tonight," sophomore goalie Connor Beauchamp said. "They came out stronger and caught us off guard at first. It was just one of those games where both teams were scoring back and forth."

Three straight power play goals lifted Liberty from a one-goal deficit to a 5-3 lead early in the third period.

The Flames took full advantage of a five-on-three opportunity with 3:45 remaining in the second period, quickly capitalizing to re-tie the contest before re-claiming a 4-3 lead on a five-on-four man-up situation 30 seconds later.

Freshman defenseman Zane Schartz netted the equalizer after working the puck on the perimeter to sophomore defenseman Ben Hughes. The former captain for the Minot Minotauros sent a return pass to Schartz for a one-timed rocket launched past Beauchamp into the top right corner of the cage.

With more than a minute left on the power play, senior defenseman Steven Bellew put the puck on net from the high slot and Garvin cleaned it up to complete his first collegiate hat trick, lifting the Flames to their first lead since the first period.

Early in the third, Liberty extended its advantage to 5-3 when freshman forward Michael Bunn tallied his first goal as a Flame, converting a third straight power-play score.

Johnson brought the Beavers back within 5-4 with 13:45 to play, finishing a give-and-go from brother Dylan Johnson for his second score of the game in the left crease.

Later, with 2:44 left, defenseman Austin Yano — who scored Minot State's first goal in Friday night's opener — netted what appeared to be the game-winner on a shot from the left crease.

However, Liberty showed a flair for the dramatic, tying the game to force overtime with just 47 seconds left in regulation. Twenty seconds after Liberty Head Coach Kirk Handy pulled goalie Cary Byron, Bunn netted a turnaround tying goal at the top of the left circle off a feed from the blue line from Schartz.

Byron, making his second start in three games for the Flames, made a brilliant save of a shot by Johnson with 20 seconds remaining in the four-minute overtime period. Then, he made a diving glove stop of the first shootout attempt by Dylan Gejdos and denied Johnson's second try before Minot forward Cole Olson beat Byron blocker side for the only goal of the shootout.