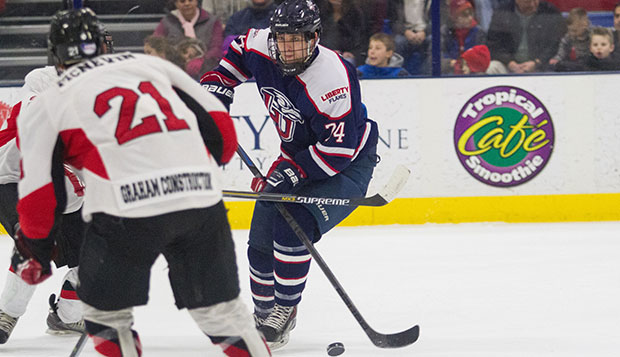 Liberty University's ACHA Division I men's hockey team left Lynchburg in time to avoid the effects of Hurricane Juaquin in Virginia only to be blindsided in North Dakota, suffering a 7-0 setback in its ACHA season opener against Minot State in MAYSA Arena.

The loss was a kind of payback for the Beavers (3-0), who were swept by the Flames (1-1) in last year's regular-season-ending series at the LaHaye Ice Center.

Minot State, ranked third in this week's ACHA DI poll, went on to reach the Final Four of the ACHA DI National Championships for the fourth year in a row after winning it all in 2013.

After outshooting Liberty 12-8 and opening a 1-0 advantage after the first period, the Beavers (3-0) only held an 11-10 second-period shot advantage, but racked up four more goals to pad their lead to 5-0 over the ninth-ranked Flames.

Defensman Austin Yano struck first for Minot State, converting the only goal of the first period past Liberty sophomore goalie Josh Halpenny. Senior forward Jeremy Johnson, who ranked seventh in the ACHA in scoring last season, pushed the lead to 2-0 on a power play early in the second period before senior captain Brett Nespor made it 3-0 with a shorthanded breakaway in the final seconds of a Beavers penalty kill.

"We will use this game as a learning tool," Liberty Head Coach Kirk Handy said.

The two teams will face off again Saturday at 8:35 p.m. (EST) in a game webcast live on pay-per-view.