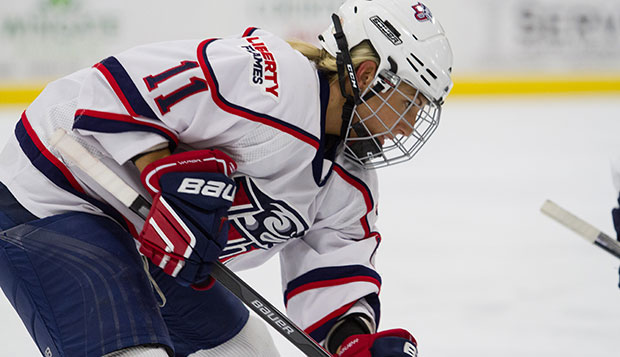 Sarah Stevenson will be the first former Lady Flames player to play professional hockey when the Toronto Furies open their season Oct. 17.

The fourth-round pick of the Toronto Furies in the CWHL entry draft in August, met with the team's general manager on Wednesday night who informed her that she made the 23-player roster, becoming the Lady Flames' first professional hockey player.

"I found out I will have a spot on the team this year," Stevenson said, noting she is one of 15 forwards to make the cut. "Whether it will be a first-line or fourth-line position, I don't know, but it will be a great experience and hopefully I will work my way up the lines."

She prepared for the team camp and tryout through a rigorous training regimen prepared by Liberty's Club Sports strength and conditioning coach Chris Kerr.

"He gave me some workouts online," Stevenson said. "I've been working out every day off the ice and working as hard as I could in the on-ice tryouts and everything played in my favor."

She said she was nervous about making the team, but received plenty of encouragement from former Liberty teammates as well as Jonathan Chung, an assistant coach on last year's team.

"Everyone was positive for me, and thought I was going to make it," Stevenson said. "I talked with Chung after almost every practice. He was a big mentor in the whole process for me."

The experience of winning the national title last year boosted her confidence going into tryouts.

"That definitely gave me a lot of motivation," Stevenson said. "I finished my senior year playing the best hockey I'd ever played, so I had a lot of confidence and believed in myself that I could do this. That really helped me in training camp, and I knew if I didn't make it, I gave it my all."

She will sign a one-year contract with the team before it opens its season Oct. 17 against the defending CWHL regular-season and Clarkson Cup champion Boston Blades. That will also be the Furies' home opener in the MasterCard Center, the practice facility for the NHL's Toronto Maple Leafs.

"I'm really excited," Stevenson said. "It's awesome to represent my little home town of Holland Landing and play in the big city of Toronto, 45 minutes away, with a team affiliated with the Maple Leafs. I'll do what I can when I'm given the opportunity and show them I'm willing to do whatever it takes to get ice time and play."

The Furies will play two exhibition games this weekend against two Canadian university teams — York University, based in Toronto, and the University of Ontario Institute of Technology.

Those will serve as tune-ups for a Toronto team that finished 5-13 last season, in fourth place out of five teams in the fifth-year CWHL — behind the Blades, Calgary Inferno, and Montreal Stars and ahead of the Brampton Thunder.

"It's a pretty well-established league," Stevenson said. "The hockey's at a very high level, with lots of former Olympians — both Canadian and American — on all five teams.

"Toronto had a good team last year and the coaches have high hopes we will do well this season," she added. "There's a lot of good talent and returning players, so that's hopeful."

Stevenson is one of four new players, with each around her age of 22.

"A lot of the returning players are in their high 20s or low 30s and have mostly all played college NCAA Division I hockey in America," she said. "Four of five of the girls played for Team Canada."

Stevenson, who graduated in May with a degree in Criminal Justice and a minor in Psychology, just finished her summer job as a marine assistant with the Ontario Provincial Police aboard a boat in the Georgian Bay. She will put on hold her pursuit of a career in the police force until the CWHL season ends in March, when she will start that process of enrolling in the spring academy.