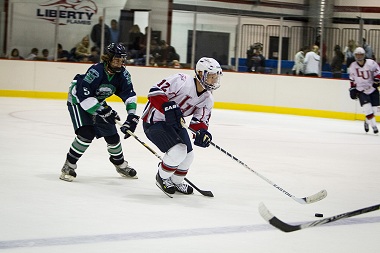 Christian Garland (#12) leads an attack for the Liberty Flames Division I hockey team as they face the Hampton Jr. A Whalers in their season opener at the LaHaye Ice Center Friday night. Garland put two in the net in the Flames' 9-1 victory. (Photo by Colin Mukri)

Senior forward Rick Turner led the way for Liberty University's men's Division I hockey team in its win over the Hampton Jr. A Whalers 9-1 Friday night in a home exhibition matchup.

Assistant Captain Matt Sherry, a junior, put Liberty on the scoreboard first as he took a pass in the right slot and beat Whalers keeper Blake Scott to give Liberty a 1-0 lead late in the first period.

Turner, who finished with 34 goals last season, notched his first goal of the season off a pass from freshman Kyle Garcia, putting the Flames up 2-0.

Christian Garland took a pass from Ryley Egan and beat Scott to put the Flames up 3-0, and shortly after Caleb Grow and Lindsay Leblanc each added goals and Liberty was up 5-0 after two periods.

After the Whalers killed a penalty to open the third, Turner picked up his second goal of the night off an assist from Cam Bakker, giving the Flames a comfortable 6-0 lead.

Hampton finally got on the scoreboard midway through the final stanza as Clayton Kanemitsu beat Flames goalie Clayton Brown on a nifty individual effort to cut the deficit to 6-1.

Liberty dominated all night, outshooting the Whalers 48-26. Brown played all 60 minutes, making 23 saves to pick up the win in net.

"After getting our initial jitters out in the first period, we settled down, played well and were able to pick our game up as the night went along," said Jeff Boettger, Flames assistant head coach.

"We had the majority of our new players step in and contribute throughout the line-up, that shows well to the depth that we have," Boettger added. "Looking toward tomorrow we have to build upon the successes tonight, refine our play, get some rest, and get ready to come back out again tomorrow and go to work."

Liberty, now 1-0 on the season, will conclude the season-opening doubleheader with another matchup against Hampton on Saturday afternoon. The puck drops at 3 p.m. at the LaHaye Ice Center.