Flames fly to North Dakota for ACHA faceoffs with Beavers 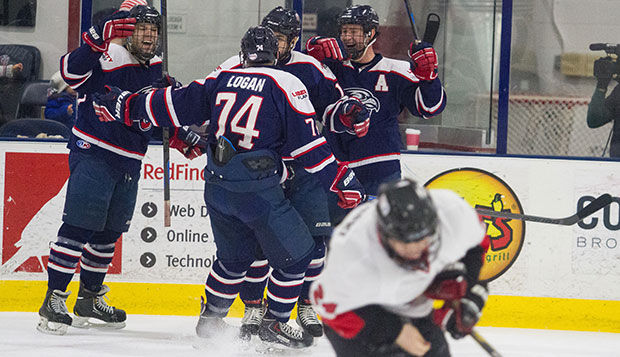 Conquering the Minot State mystique may be the biggest challenge facing Liberty University's ACHA Division I men's hockey team this weekend. The Flames, ranked No. 9 in this week's ACHA DI national poll, flew out of Washington, D.C., and through Denver on Thursday to arrive in Minot, N.D., in time to challenge the third-ranked 2013 national champion Beavers on their home ice.

"We're definitely looking forward to it," Liberty Head Coach Kirk Handy said. "It's an exciting time for us and a great opportunity to go up there and really put into application what we've been practicing for about a month now against a team like Minot. We're going to have to come ready to play and to jump right into the season instead of easing our way in. We're going to have to work hard."

It is one of the ACHA's top showdowns of the week, pitting the only Independent teams in the top 20.

"This is a big series for both programs," Minot State Head Coach Wade Regier said. "I have the utmost respect for what Kirk has done with his program. As independents in the ACHA we really depend on each other for scheduling. With both programs being ranked in the top 10 annually, these games become extremely important."

Flames sophomore head captain Ben Hughes is from Florida, but played some Junior hockey in North Dakota, as captain of the Minot Minotauros, who compete in the North American Hockey League. He knows better than most how difficult the Beavers are to beat in their home rink.

"Minot is a heavyweight and we want to make sure we're ready," he said. "Playing Minot the first game as a freshman last season, I was blown away by how fast they were. We've got to get acclimated quickly."

The two teams split four games last season, with both defending their home ice with two-game sweeps. Liberty lost early leads at Minot last Oct. 10-11, eventually dropping the opener in the third shootout setback of their five ACHA games. The Flames concluded the regular season with 5-1 and 3-1 triumphs over the third-ranked Beavers at the LaHaye Ice Center.

"Last year, all four of them were close games and we're anticipating four more great games with them this year," Handy said. "Both teams are going to give each other their best shots and that's what we want. We want to give our best to Minot and have them give us their best. That's important for us."

While Liberty is playing its first five games away while the LaHaye Ice Center's renovations are finished, Minot will hold a ground breaking ceremony on Oct. 15 for the MAYSA Arena's expansion, made necessary by significant attendance increases in recent seasons.

"We know it's going to be a raucous crowd," Regier said. "We're expecting close to sellouts both nights because I think everybody in this city's anxious to have hockey. It's all about getting that crowd into it early. We need to get some offense and some good scoring opportunities early on and then use that momentum throughout the night."

Handy expects the Flames to respond and execute their game plan, even in a hostile environment.

"We feel like our preparation has been great and our guys have reacted well to every situation they've been put in," he said. "I really like our schedule this year. Night-in and night-out, we're going to have to compete. There's not going to be a night off or an easy night for us."

He said the match between two teams loaded with talent will be determined by which one rises above the pressure of performing for the crowd and works best together as a team.

"We're going to have to come out and manage the game well from our perspective to make sure that we're making good decisions with and without the puck," Handy said. "We want to really have that compete level for 60 minutes, and not for just one game, but two."

Liberty scouting report: The Flames feature a whole new look this year, with 10 freshmen on their 26-man roster who have been thrown into the fire and injected the lineup with new life.

"We like the energy amongst our guys, who have worked hard to get to this point," Handy said. "The first month of the season's tough, going over new systems and trying to get to a point where we have the right combinations together with 10 new players. They'll add some excitement to our team."

He looks to Hughes — Liberty's top returning scorer even as a defenseman — and senior alternate captains Bram Erickson, Danny Logan, and Steve Bellew to provide leadership for the younger players and establish the tone for the Flames on the ice.

"Those are guys who set the bar high for guys every day and come every day in practice and work hard," Handy said. "If ever our guys wonder what it's like to work hard, they just need to look at those four guys."

The Flames are far from a finished product, but they are refining their game every time they take to the ice.

"We feel great about our team," Handy said. "It's a work in progress, but we're excited to see how they develop. They come to work hard every day and they've all improved since they've gotten here, which is a really encouraging thing for us."

Sophomore forward Paul Lamoureux was Liberty's leading scorer with two goals in its 5-3 opening victory over the Potomac Patriots on Sept. 18. Freshman forwards Jeff Wilson and Michael Bunn netted their first goals as Flames in that game, with Bunn finishing a feed from junior forward Robert Ward, Liberty's second-leading scorer as a freshman.

In goal, Liberty has one of the most talented trios in the ACHA with sophomore Josh Halpenny, junior Matt Pinel, and Cary Byron, a graduate student who started against the Patriots.

Goalie Connor Beauchamp posted a 10-2 record with a team-best 2.11 goals-against average and 0.927 save percentage as a freshman last season.