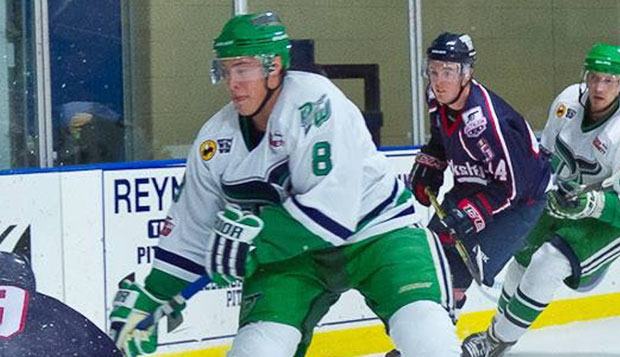 Scott Morongell was named one of two defensemen of the year in the Federal Hockey League in 2013-14, playing for the Danbury (Conn.) Whalers.

A year after being named one of two defensemen of the year in the Class A Federal Hockey League (FHL), while playing with the Danbury (Conn.) Whalers in the 2013-14 season, former Liberty University ACHA Division I standout Scott Morongell received a Player Tryout Offer (PTO) and will report to the Evansville (Ind.) IceMen training camp on Wednesday.

The IceMen, who play in the 11,000-seat Ford Center, are one of 28 teams in the East Coast Hockey League (ECHL), the AA affiliate of the NHL's Ottawa Senators. The ECHL features a total of 28 teams from as far north as Alaska and as far south as Florida.

"This is the best opportunity I've given myself to make it at the next level and I'm really looking forward to it," Morongell said. "I feel really blessed. All summer, my phone was pretty quiet, but God opened the door for me for a reason. I'm excited for the opportunity and I want to make the most of it, to go to camp, play my best hockey, and hopefully make the team."

He and the 30-35 other players selected to the training camp will begin tryouts Thursday in the Ford Center. Morongell will be competing for one of seven or eight spots reserved for defensemen on the IceMen's 22-man roster, challenging at least a few players who didn't make the cut for the Ottawa Senators or AHL Binghamton (N.Y.) Senators.

At the conclusion of the first full week of training camp, the IceMen will travel to Fort Wayne, Indiana, to battle the rival Komets in two preseason games Oct. 9-10. The roster will then be trimmed to 22 players for the Oct. 17 regular-season and home opener against the Indy Fuel, another rival in the Midwest Division of the Western Conference of the ECHL.

Last preseason, Morongell received a PTO from the ECHL's Wichita (Kansas) Thunder but didn't make the team. He wound up playing three months in a European league team in France before returning to Danbury for the postseason.

"The way I see it, this year is make-or-break for me, to determine whether I'm going to be able to make a career out of it and play professionally," said Morongell, who's 24. "If I wanted to, I could go back to the FHL, but I'm not going to. My competitive side wants to play at the highest level that I can."

He said getting invited to an ECHL training camp is difficult in the trickle-down tryout process in North American professional leagues.

"It's very tough to try to get in right now, especially as a free agent guy," Morongell said. "Coaches are waiting for all the guys trying out for NHL clubs who don't get contracts to drop down to the AHL training camps and then to the ECHL. I'm a guy trying to climb up the ladder, trying to go up the other way, so it's very competitive."

Besides working at Fellowship of Christian Athletes (FCA) camps in Maryland and California over the summer, Morongell stayed in Minnesota and North Dakota, training on and off the ice with players in the ECHL, American Hockey League (AHL), minor league hockey's AAA level, and even a couple from the NHL.

One of those players was Gary Steffes, a close friend who led the ECHL in scoring last season while playing for the Allen (Texas) Americans before being called up to the AHL's Milwaukee Admirals. Steffes will start this season with the San Jose Barracudas, an AHL expansion team affiliated with the NHL's San Jose Sharks.

Morongell also spent two weeks in training sessions with Frank Burggraf in Minnesota, one of the top skating instuctors in the world, improving his technique, speed, control, and power on the ice.

He believes his skillset as a defenseman with the ability to put the puck in the net — as he demonstrated throughout his career with the Flames — should give him an edge over his competition.

"I like to consider myself a two-way defensemen who likes to jump on a rush and use my offensive skills," Morongell said. "That's one of the bigger assets of my game. I've put up a lot of points throughout my professional career so far."

Durability and physicality are two other factors in his favor, and the New Jersey native, who studied Criminal Justice at Liberty, prefers the American game to the finesse style he was forced to play in France.

"I play a lot of minutes, though I'm not super physical all the time," said Morongell, who's 6-feet tall and weighs 205 pounds. "I do like to play with some grit. In the United States, it's a battle every play."

He said the life of a professional hockey player is more grueling than many would imagine, even at the lower minor league levels.

"It's a tough profession to be in," Morongell said. "It's a big commitment, a lot more than the fans see. There's a lot of stuff behind the scenes — eating right, conditioning, practice — you've got to be dedicated. The season might be eight or nine months, but it's a full-time, year-round job, training during the offseason. I'm in the gym four to six days per week, working on speed, getting bigger, stronger, and faster." 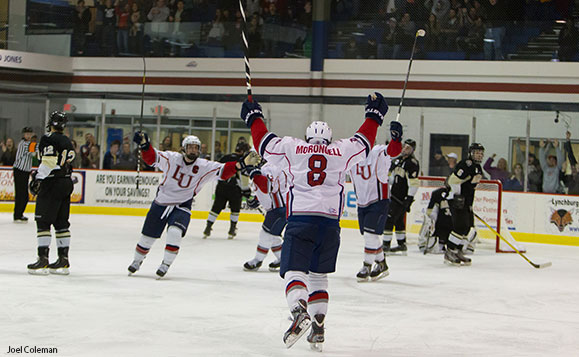 Scott Morongell scores a goal against Oakland, Feb. 8, 2013, as a senior on Liberty's ACHA DI team.