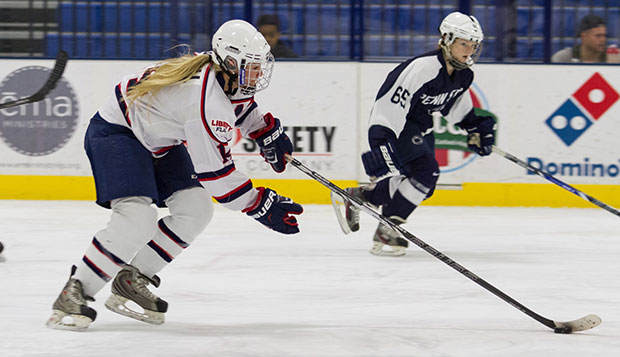 Plagued by penalties, Liberty University's ACHA Division I women's hockey team came away from its season-opening series against the Washington Pride U19 travel team with a loss and a tie Saturday night and Sunday afternoon in the Rockville (Md.) Ice Arena.

The defending ACHA Division I national champion Lady Flames (0-1-1) lost the first game, 2-1, after having a potential goal called back in the third period. In Sunday's rematch, Liberty lost a three-goal lead in the final four minutes of regulation and settled for a 7-7 tie. The Lady Flames actually had four power-play goals in that contest to three for the Pride.

"There were a lot of penalties that didn't need to be called, which disrupts the flow of the game," Liberty Head Coach Paul Bloomfield said. "Between the goal that got called back in the first game and the power-play goals they got on us in the second game, that just hurt us."

The Washington Pride, which started its season two months ago, swept two games against the Lady Flames two seasons ago at the LaHaye Ice Center, three weeks after Liberty returned from a third-place showing at nationals.

"I watched them two weeks ago up in Ontario, so I knew what we were up against," Bloomfield said. "They're pretty decent. The results weren't what I would have liked, but we were able to find strengths and weaknesses in everybody and make sure we're ready to play when we need to. For the first games, I was satisfied with it. It was good to get everybody on the ice and that's what exhibition games are all about."

After a scoreless first two periods in the opener, Washington netted the first two goals of the third period — off power plays finished by forwards Sierra Semmel with 13:35 left and Maggie McLaughlin with 12:21 to go.

The Lady Flames appeared to cut the deficit in half moments later, but an official whistled the puck dead a split second after a Liberty player put it in the back of the net.

"There was a melee in front of their goalie, who was down with four or five other people in there," Bloomfield said. "The ref thought the puck was underneath the goalie but it was still loose."

Senior forward and head captain Carrie Jickling finally got the Lady Flames on the scoreboard with 4:49 remaining in regulation, off an assist from alternate captain and fellow senior forward Catherine Burrell.

"She got a breakaway and sent a backhand over the goalie," Bloomfield said.

Liberty outshot the Pride 38-27 for the contest and sophomore goalie Rosie Kelly made 25 saves.

The Lady Flames maintained a 30-20 shot advantage in the recap, when Burrell scored four goals and distributed two assists in the 14-goal affair.

"She was on fire," Bloomfield said.

Washington forward Veronika Pettey started the scoring just two and a half minutes after the opening faceoff before Burrell netted the equalizer six minutes later off an assist from sophomore C.J. Tipping and lifted the Lady Flames to their first lead with 8:20 left in the period, off an assist from Jickling.

Freshman forward Kjristin Hoberg extended Liberty's lead to 3-1 with 36 seconds left in the first on a power-play goal assisted by Burrell before the Pride knotted the contest at 3-3 on back-to-back goals by McLaughlin with 16:08 and 12:44 to play in the second.

Burrell put the Lady Flames back on top, 4-3, scoring a power-play goal off an assist from graduate forward Nikki McCombe with 8:23 left in the second before Pride forward Karrina Cave-Hawkins tied it back up on a power play with 3:19 to go in the period.

Finally in the third, Liberty jumped out to a 7-4 advantage, with the first two goals coming on power plays — the first by sophomore forward Courtney Gilmour with 18:27 to go assisted by freshman forward Lauren  McDonald.

McDonald put the Lady Flames on top 6-4 with 16:45 to play, finishing assists from Hoberg and Burrell, who netted the third on a shot from the point off a pass from Tipping with 10:30 remaining.

But Washington responded with three goals in a span of three minutes to tie the game for the fourth and final time. Defenseman Kerri Corcoran tallied a power-play goal with 3:42 left before the Pride pulled its goalie and scored twice more with a player advantage — by Semmel with 1:10 to play and Pettey with just 46 seconds remaining.

Liberty is off next weekend before embarking on its first major road trip, with games at Northeastern next Thursday (Oct. 8) and Rhode Island Oct. 10-11. The Lady Flames' openers in the renovated LaHaye Ice Center are scheduled for Homecoming Weekend, Oct. 22-23 against Vermont.