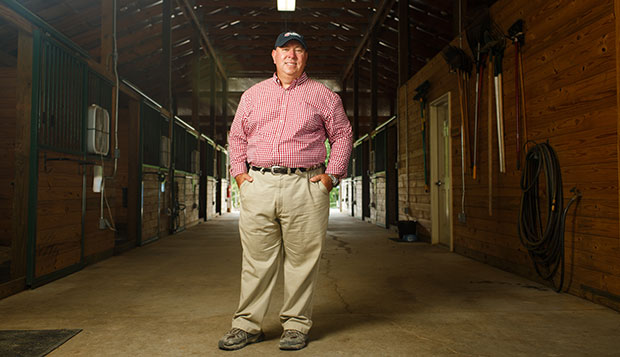 Jim Arrigon, who helped develop multiple collegiate programs and individual riders to national prominence over the past 30 years and serves as secretary of the IHSA, has found a new home as executive director of Liberty's Equestrian Center.

In his first season as executive director of the Liberty University Equestrian Center, Jim Arrigon has set the bar high and established lofty goals for the 23 hunt seat and 11 western riders in the third-year program.

However, his expectations were tempered a bit when junior team captain Liz Chenelle suffered an injury while falling off a horse in Tuesday's practice. Last season's Region 5 Hunt Seat champion and Intercollegiate Horse Show Association (IHSA) Zone qualifier will miss the next three months of competition, but should be back in the saddle in time to defend her title in the spring.

"Building a successful team will be a multi-year project," said Arrigon, who has mostly sophomore riders to work with. "I had high hopes that we could contend for a regional championship with the hunter team till the injury to Liz, but both hunter and western are much improved from last year. We'll have a better look this weekend."

The Lady Flames will open their season by taking nine riders to a Hunt Seat show featuring most Region 5 member schools, this Saturday at 9 a.m. at Averett University. Liberty will travel with a full team, including one male hunt seat and one male western rider, to Region 5 favorite Virginia Tech on Oct. 4 at 9 a.m. and High Point for a two-day show Oct. 17-18.

Top hunt seat riders to watch are Courtney Kerns, a senior from Virginia, Morgan Faber, a freshman from Richmond, and Erin Wassem, who transferred in from Sweet Briar College's well established riding program. The Western team will be led by senior captain Kayla Sims from Kansas, and sophomore Kari Hicks from Ohio while Arrigon said Heather Thompson, a freshman from Rustburg, is another exciting addition.