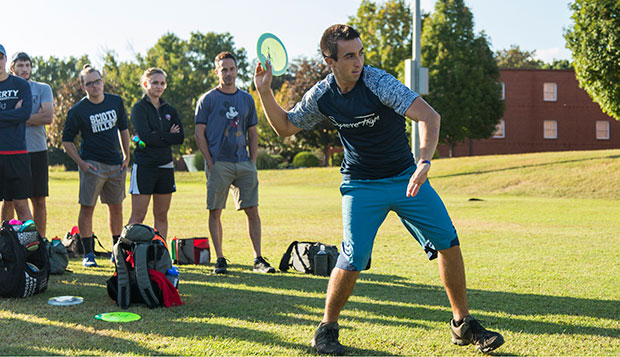 Liberty University's disc golf team had a rare opportunity to learn from two of the best in the world Tuesday afternoon during a clinic conducted by full-time professional players Paul McBeth and Nate Sexton on the Champion Circle intramural fields.

McBeth, who's from Huntington Beach, California — not far from Pasadena, where the sport originated in the 1970s — is the No. 1-ranked player after winning the past four Professional Disc Golf Association (PDGA) World Championships, including this past Aug. 4-8 in Pittsburgh.

"That's the last major I've competed in, leading up to the United States Championships (Oct. 7-10 hosted by Winthrop University) in Rock Hill, South Carolina," said McBeth, who turned pro when he was in high school and has since won 85 tournaments and nearly $250,000 in career earnings. "Liberty University is allowing us to come here, so it's an honor to be able to do this, and these are kids that we could be competing against one day."

Sexton, who's from Oregon and lives in Chapel Hill, North Carolina, turned pro before organized collegiate disc golf existed. He is currently ranked No. 14 in the world, after placing 10th at this year's World Championships, and has spent much of the past 11 years on the pro circuit ranked between No. 5 and 15. He has won 78 tournaments and placed fifth at last year's U.S. Championships when McBeth, who has never won that event, lost a playoff to finish runner-up.

"Having these guys come out and do something like this just builds the excitement, and lets the guys understand that we're one of the top programs in the area," Bowman said.

McBeth tried out Liberty's course, which wasn't quite finished when the Flames hosted last year's national qualifier, and rated it highly.

"It's deep in the woods and it's tight, but it's very fair," he said. "If you throw your shot down the fairway, you know it's going to be good and you won't have trees kick it into the woods. This one's definitely designed well and Coach Steve (Bowman) made it that way."

McBeth and Sexton have traveled across the United States, and even to Europe this year, leading clinics that identify simple mistakes in players' throwing techniques.

"It's really simple things to fix that will improve your game nearly immediately," McBeth said.

"We help people identify the common bad habits that we see," added Sexton, who coached Oregon State's team for four years, taking the Beavers to two National Collegiate Disc Golf Championship tournaments. "It takes practice after that. It's on them. We can give them the tools to be able to become a better player, but then it's up to them to put that into practice and then maybe they can get up on our level someday, we hope."

Liberty sophomore Justin Towns and the other 15 members of the team who participated in the clinic benefited from the instruction.

"It was awesome," Towns said. "It's super cool because I watch these guys play all of the time on YouTube. To be able to hear from them firsthand and learn what it takes to play well, it's incredible. I loved it … just being able to engage with them and ask the questions I wanted to ask and deepen that strategy and those techniques."

He asked about the psychological factors involved in preparing for tournament competition, such as collegiate nationals in April — where the men's team placed ninth in last year's Championship Flight — and even the upcoming Flamethrower Invitational.

"It was very refreshing to hear how they approach it because it can be really intimidating," Towns said. "Being able to prepare ourselves ahead of time mentally for that kind of experience is good."

Earlier in the month, the Liberty Flames Sports Network (LFSN) crew filmed a "Game On" segment featuring McBeth, who visited Liberty and impersonated a student with average playing ability trying out for the team. Towns gave pointers to the world's top-ranked player after McBeth shanked several shots in a practice round on the East Campus course.