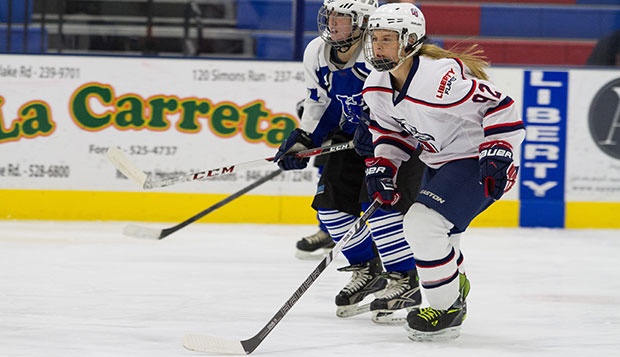 Junior forward Courtney Gilmour will look to increase her production on the Lady Flames' top line this season, working with captains Carrie Jickling and Catherine Burrell.

Numbers are down but spirits are up on Liberty University's ACHA Division I women's hockey team, which opens its season with exhibition games against the Washington Pride U-19 Junior squad this Saturday at 7:50 p.m. and Sunday at 11 a.m. in Rockville, Md.

After graduating eight seniors, the 2014-15 national champion Lady Flames, who were ranked second in the preseason poll behind tournament runner-up Miami of Ohio, will try to defend their title with a 15-player roster. The poll was revealed last week on the LFSN-produced ACHA Women's Preseason Show.

"Everything looks good so far," Jickling said. "It's definitely a rebuild year, but I'm excited to see the progress that everyone's going to make. It's pretty hard to beat everything that happened last year, but we'll definitely have a good run for it again this year and things look bright in the future, for sure."

The Lady Flames are excited to play in the newly renovated LaHaye Ice Center, which will be ready for Homecoming Weekend when the Lady Flames host Vermont on Oct. 22 at 9:45 p.m. and Oct. 23 at 5:45 p.m.

"I can't wait for our home opener," Jickling said.

"It's fantastic what they've been able to do here, for the teams incoming and to develop the programs as well," graduate forward Nikki McCombe added. "It's awesome."

Head Coach Paul Bloomfield said the team chemistry is better than ever, which will be key to maintain for the Lady Flames to have a shot of defending their title.

"It's going to be awesome this year," he said. "This group's really coming together better than they have the last couple of years. The team last year was united on the ice, but they weren't buddies off the ice. This team's pretty tight."

Assistant coach Justin Forth, who helped the program rise through the ACHA DI ranks, returns after a year spent in California, instilling camaraderie and a high level of competition on the ice from the bench.

"He's a huge part of our program," McCombe said. "He's put a lot of hard work in and I think he really was a part of those key moments in developing our team early on when we first started to get that steam rolling to the national title."

Liberty, which outscored regular-season opponents 161-32 last season, will have plenty of offensive firepower. Jickling and Burrell have played on the same line as junior forward Courtney Gilmour for the past two seasons. Junior Nicole Douglas and sophomore Chelsey Greenwood will provide supplemental scoring and playmaking ability along with freshman center/wing Lauren McDonald.

Jickling said the team's preseason conditioning should help set them apart from the competition.

"It shouldn't be too bad as long as everyone's healthy," Jickling said. "We'll definitely get a lot of ice time, but that just means we're going to be the hardest-working team in the league and definitely the team with the best legs and lungs come nationals."

"We definitely have a small bench, so this year's going to be based on hard work and perseverance, staying injury-free and playing together," Burrell added. "We've got some speed in there and some hands, so that will help us out."

Bloomfield, who anticipates a recruiting class of 10 to 12 players next year, doesn't expect depth to be a problem this season.

"We've had small teams before," he said, noting the team qualified for nationals with fewer than 15 players twice in recent years. "It's going to be thin, but we'll be all right. People step up when that opportunity comes. Our fitness level is going to be strong this year so I'm not worried. Everybody's in better shape because everybody's playing."

"Every year, everybody gets a little bit better," he said. "It's a matter of the sophomores and juniors stepping up and taking on more responsibility and bringing their game. Courtney Gilmour (a junior forward) started coming on at the end of the year, so I'm hoping that she really shines this year. Carrie (Jickling is) a strong player with good size. We've just got to get people to play with them. They can't do it by themselves."

Defensively, senior Brittany Hymers is the Lady Flames' top returning player and she will be complemented by C.J. Tipping, who may shift back from forward and play defense as well.

"Hymers just keeps getting stronger every year she plays," Bloomfield said. "She's going to be a key player this year."

She can also rely on defensive support from forwards like McCombe.

"I love being a two-way player," McCombe said. "Definitely, the defensive zone comes first in my mind, so I'll focus on helping out the D-zone and building from there, working on the transition game."

Liberty lost three of its four goalies from last year and sophomore Rosie Kelly will likely be the primary starter between the pipes, backed up by freshman Kelly Hutton.

"Rosie will be able to handle it well," Jickling said. "She had a good year last year when she did get a chance to hop in net. With the goalie coaches and everything, she's made a lot of improvements and development so I'm sure she's ready to take on the challenge."

The Lady Flames will open ACHA DI play Oct. 8 at Northeastern before traveling to Rhode Island for games on Oct. 10-11. The first regular-season ranking will be released Oct. 25.