Flames rise to No. 9 in first ACHA DI poll of regular season 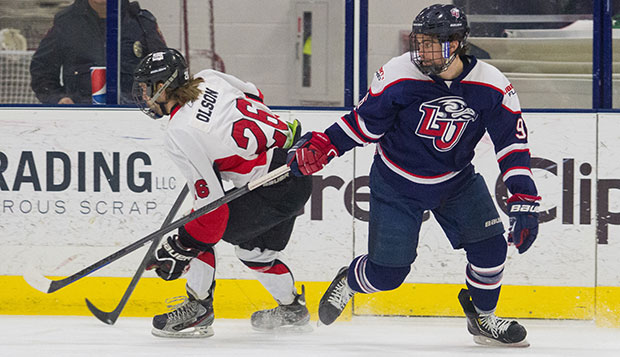 Flames defenseman Steven Bellew battles against the boards with a Minot State in last season's sweep of the Beavers at the LaHaye Ice Center.

Liberty University moved up one spot to No. 9 in the first ACHA Division I men's hockey rankings of the 2015-16 season, after being ranked 10th in the preseason poll released last week.

Central Oklahoma, the defending national champion, received 36 out of 40 first-places votes to maintain its No. 1 ranking, followed by No. 2 Stony Brook, No. 3 Minot State, No. 4 Ohio, No. 5 Robert Morris-Illinois, No. 6 Lindenwood, No. 7 Iowa State, and No. 8 Adrian. Liberty moved up to No. 9 after Oklahoma dropped from No. 7 to No. 10 by splitting its opening series with Arkansas, which debuts in the No. 25 position.

The Flames are idle this weekend before traveling to challenge third-ranked Minot State, who won the ACHA DI national title in 2013, Oct. 2-3 in Minot, N.D. Liberty swept the Beavers in its last home series last season, before the renovation of the LaHaye Ice Center, which will reopen Oct. 23-24 against Davenport in the first two games of the annual, best-of-three Blue & Gray Cup.