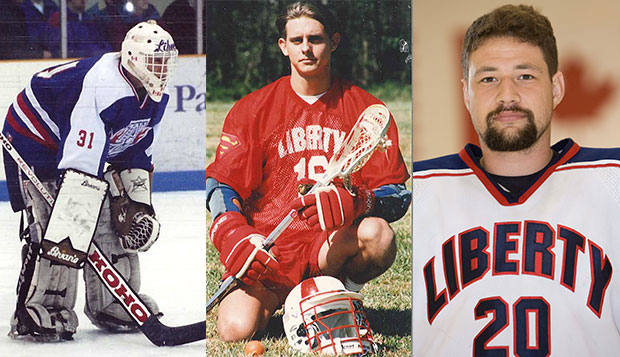 The second annual Club Sports Hall of Fame induction ceremony will take place on Friday, Nov. 13, in the Hancock Welcome Center, prior to the Flames' ACHA Division I men's hockey game against Delaware which starts at midnight.

The three new inductees will be honored during the first intermission of the Flames' hockey team's rematch against the Blue Hens on Saturday, Nov. 14, which starts at 7 p.m.

"The bios were strong for all three candidates," said Derek Young, chairman of the Hall of Fame committee. "Since we have two hockey players going in, we felt, as a committee, it was logical to put in two players from different eras."

Semenyna, a defenseman who scored 102 goals and distributed 160 assists for a total of 262 points in 144 games played from 2006-10, was voted in on the first ballot he was eligible — five years after capping his career with the Flames.

He guided the team to an overall record of 109-38 in his four-year career — including an ACHA DI National Championship Final Four finish in 2009. He graduated with a degree in Sport Management and later joined the coaching staff before becoming Liberty's associate director of Club Sports, overseeing its ongoing construction projects, including the renovation of the LaHaye Ice Center.

Kortright represented Liberty at the National College Lacrosse League All-Star Games all four seasons he played for the Flames (from 1995-98) and was named Most Valuable Player with two goals and one assist in the first half of the game held in his home state of West Virginia, at WVU, in 1996.

For his career, the midfielder netted 60 goals and distributed 35 assists, including 16 his senior season.

The Sport Management major played an even more valuable administrative role for the team, taking the coaching reins his sophomore season and keeping the program running after the seniors who served as players/coaches the previous season graduated.

Kortright recently started up the lacrosse program at Spring Mills High School in West Virginia and has stayed connected with Liberty Lacrosse by starting its alumni web page in 2008. He serves as a contact for the more than 100 alumni players, many of whom will return to Lynchburg for the annual alumni game over Homecoming Weekend, Oct. 22-23.

Walyuchow played goalie for the Flames from 1993-97, posting a 36-9-4 career record with four shutouts and a 2.38 goals-against-average.

Most notably, he filled in as interim coach for Club Sports Hall of Fame inaugural class member Dr. Gary Habermas during his wife Debbie's battle with cancer in 1994. He led the Flames to their first-ever ACHA DII national tournament win that same season, when he was undefeated between the pipes with a 1.5 GAA and five assists.

In 1996-97, after Liberty joined the ACCHA, Walyuchow posted a 4-3 overtime victory over top-ranked Virginia and a 4-2 win over North Carolina in the regional final, earning first-team all-conference honors and "Best Goalie" award for the tournament.

After receiving his Education degree at Liberty, Walyuchow is now a high school teacher and JV football coach in his home town of Calgary, Canada, where he has also served as a coach with Hockey Ministries International and worked with the Canadian Women's Junior National team's goalies.