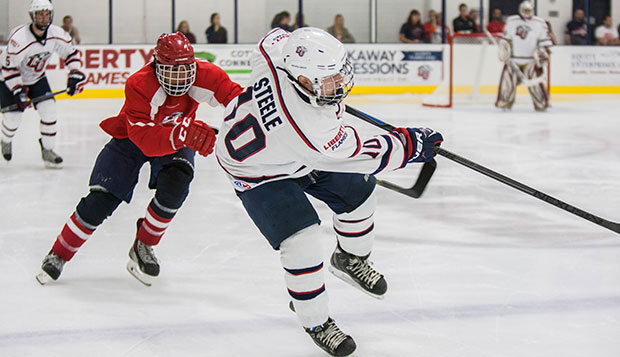 With 10 new players suiting up this season, the game proved a valuable chance for the Flames to get their first-game and first-season jitters out of the way and utilize their systems in a game situation.

"That's why we play this game — we want to use it as an opportunity for the guys to learn," Head Coach Kirk Handy said. "We knew there would be some nervousness, obviously, and after practicing for three weeks, it's definitely time to see game application. The film will be a good tool for us to make changes and improve as a team."

Liberty got off to a slow start. The young but energetic Patriots scored just seconds into the first period and pressed the Flames, prompting turnovers and missteps in the neutral zone.

The Flames learning curve was steep, but they traversed it quickly — tying the game late in the first with a goal by freshman forward Jeff Wilson, assisted by senior defenseman Steven Bellew, and headed into the second period looking better adjusted.

"I think we had a really slow start, but our second period was our best period," sophomore defenseman Ben Hughes said. "I think we were pretty lackadaisical and weak in the defensive zone starting off the game, but I think we realized that and tightened up, so I was proud of the guys for that."

Senior defenseman Kyle Miller found sophomore forward Paul Lamoureux early in the period for what would be the first of three Flames goals. Senior forward Danny Logan buried a power play goal with help from junior forward Grant Garvin and freshman defenseman Zane Schartz not long after, then paired with junior forward Robert Ward to assist a goal by freshman forward Michael Bunn.

The Patriots made a late third-period push, netting two goals just 10 seconds apart to cut the Flames' lead to 4-3. After pulling their goalie with a minute and a half left in the game, though, Lamoureux took a pass from senior forward Bram Erickson and finished a breakaway empty netter to seal Liberty's victory.

Handy and Associate Head Coach Jeff Boettger agreed that special teams were the Flames' strength of the game, and Boettger was pleased with the team's energetic forecheck in the second period. Improving the transition game will be a focus in upcoming practices, but all in all, coaches and players alike were simply pleased to get a game under their belts.

"If I was giving us a grade out of 10, I'd probably give us a six and a half," Boettger said, "but it's sort of to be expected in the first game, with guys getting used to each other, different linemates and all those things. But overall, it was good effort and it's just good to get out there."

"It's good to get the first game jitters out of the way," Logan agreed. "Obviously there's a lot to improve and work on, but I thought we did all right for the first game. With 10 new guys, everybody has got to get used to playing together and playing our systems. It's good practice and now we're ready to work hard getting ready for Minot."

The Flames travel to take on the Minot State Beavers, Oct. 2-3 in Minot, N.D., where they hope to see that hard work pay off.