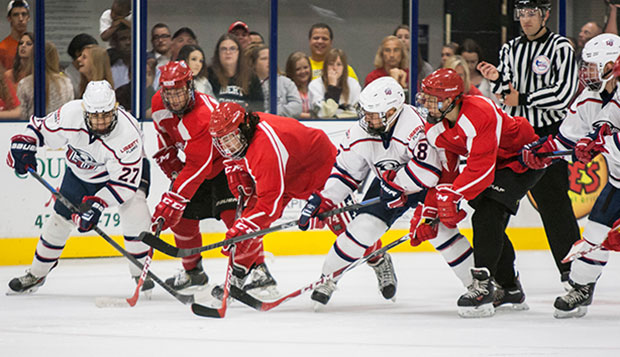 For the second year in a row, Liberty University's ACHA Division I men's hockey team opens its season against the Potomac Patriots Junior Elite squad, Friday at 7 p.m. in the Prince William Ice Center.

Liberty won last season's opener 7-2 at the LaHaye Ice Center, but with that arena in the final phases of a major renovation and expansion, the Flames will play an exhibition game away from home for the first time since it opened in 2006.

Liberty Head Coach Kirk Handy is eager to see how his players respond to their first live action, especially on the road.

"Potomac will be a good test for us, and we're really looking forward to it," he said. "We've had a great relationship with them over the years and it's a great opportunity for us."

He expects there to be a transition time for many of the Flames' newcomers, including 10 freshmen, which will give them a chance to solidify their status or move up the ranks on the depth chart.

"There will be guys who have not played at this level and we want to give them exposure," Handy said. "We want to put into application what we've been doing in practice last couple weeks. We've been introducing systems and instilling a great level of ownership so the players know what needs to be done to make those systems work."

Liberty sophomore defenseman and head captain Ben Hughes is eager to see his teammates work together as well as showcase their individual talent on the ice.

"I can't wait," he said. "It's definitely a first test for the rookies, all the freshmen. Everyone is itching to play against someone other than their teammates. That will start to unite us even more, to play as a team."

Hughes said it is important for the Flames to establish their game, and set the tone for the season, from the opening faceoff.

"We're going to start this week the same way we approach the rest of the year, to get into a routine," Hughes said. "That way, by the time we get to Minot State (for their ACHA opener Oct. 2-3 in North Dakota), it's not the first time everyone's done it. We'll have confidence in the routine and what we do."

He said it will be key for the Flames to keep their emotions in check, especially playing away from the comforts of home.

"We have to show up to play physically, but the most important thing is we have to show up mentally," Hughes said, noting they can't afford to take the Patriots lightly. "We've got to get into the habit of playing on the road and get into the mindset that we're playing the top team in the league. It can't just be a light switch that we can turn on whenever we need it.

"Minot is a heavyweight, and we want to make sure we're ready," he added. "Playing Minot the first game as a freshman last season, I was blown away by how fast they were. That's why this weekend is important, to embrace the routine and prepare for the legend (that is Minot State). We've got to get acclimated quickly."

Liberty scouting report: The Flames are most experienced between the pipes, with their top three goalies returning from last season, led by junior Matt Pinel, who was 8-0-1 with a team-low 2.32 goals-against average and team-high 92.6 save percentage with two shutouts last season. Sophomore Josh Halpenny (6-4) also posted two shutouts and graduate Cary Byron (6-4-1) logged the second-most minutes.

Though a defenseman, Hughes is the Flames' top returning scorer from last season after scoring eight goals and adding 28 assists. Look for forwards Robert Ward and Kyle Garcia and alternate captains Bram Erickson and Danny Logan to pick up the scoring slack on the front line along with junior Grant Garvin, sophomore Paul Lamoureux, and a host of freshmen.

On defense, he will be complemented by graduate Peter Shantz, junior Chase Harris, senior Steven Bellew (an alternate captain), and a few freshmen, including Zane Schartz, who was ranked among the top 15 rookies in the ACHA Division Preseason Show aired by LFSN on Wednesday night.

Dustin Moyer started both games in goal for the Patriots, allowing nine goals while making 74 saves for a 4.50 goals-against average and an 89.2 save percentage.

Coaches: Handy is in his 16th season as the Flames' head coach and has compiled an overall record of 333-140-19. The Patriots are coached by Sean Braziel.