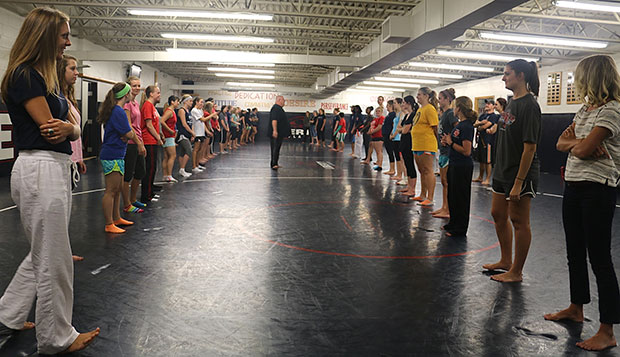 A total of 50 Liberty University students attended a self-defense seminar conducted by coaching staff and members of the tae kwon do team, last Monday night in the Wiseman Wrestling Room at Williams Stadium. The class was designed to educate and train students to avert or escape from physical assaults or potential attacks from sexual predators.

"This is our third year running these seminars, where we teach very basic self-defense techniques and self-awareness strategies," Liberty Head Coach Tom Childress said. "We tell students to be aware of their surroundings and trust their bodies' natural instincts to avoid dangerous situations."

The tae kwon team has maintained a roster of 23 men's and women's student-athletes this season.

"We returned everybody but three students and we gained some new team members," said Childress, who took over the program this summer from Jesse Wilson, who founded it in 2011.

One of the returning members is Matt Gallagher, an online student from Stafford, Va. He is close to being one of the top 150-ranked middleweight black belts in the nation, which would secure him an invitation to the Olympic Training Center to try out for a spot on Team USA for the 2016 Summer Games in Brazil.

The men's and women's teams will open their seasons Oct. 3 at the first Atlantic Collegiate Alliance of Taekwondo (ACAT) tournament, hosted by the University of North Carolina. Of the 14 current members of the league, Liberty and UNC expect to be joined by Clemson, Duke, Virginia, Virginia Tech, and William & Mary for the first of four ACAT events (two fall, two spring) leading up to the National Collegiate Taekwondo Association championships in early April.