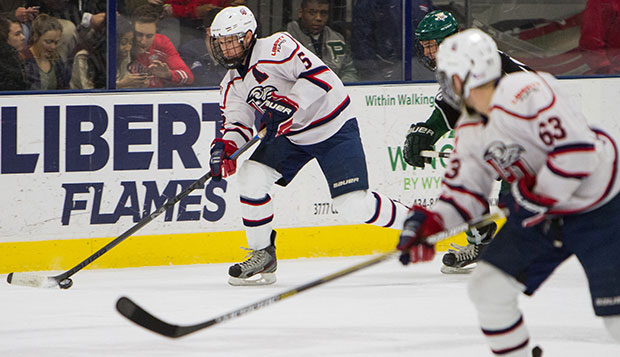 Members of Liberty University's ACHA Division I men's hockey program had some quality team bonding time on its weekend retreat to The Master's Inn in Altavista, where the players also voted on captains for the 2015-16 season.

Sophomore defenseman Ben Hughes, a late addition as an alternate captain last year, will start this season as the Flames' head captain.

"I'm definitely excited for the challenge," Hughes said. "I have a lot of really good leaders around me that will make it a lot easier. It's not all on my shoulders and the coaches keep reminding of that."

"Those are four hard-working guys who obviously encourage others to work hard around them," Liberty Head Coach Kirk Handy said. "It'll be a strong leadership corps and those guys will work hard together."

Hughes said the Flames have plenty of leadership and support throughout their lineup this season.

"There are a lot of guys on the team that are great leaders that don't have a letter on their jersey this year," he said. "I'm the only returning captain, but (the alternates) are all very capable leaders, too. All three of them could have been head captain instead of me.

"I'm definitely thankful for them and their experience, and I'll be relying on them a lot, for their ideas and insights," he added. "All three guys will give it their all and I'm excited to work with them."

Hughes considers his personality and playing style more similar to former Flames defenseman and assistant coach Jake Hannon than that of last year's head captain Matt Sherry, a four-year defenseman who he started alongside last season.

"Jake's been a huge influence on my life and I'm going to miss him a lot," Hughes said. "He's poured into me a lot in helping me to really be prepared for this role."

Not always an outspoken leader in the locker room, Hughes is more of a mentor on the bench who takes action on the ice.

"I definitely try to lead by example as much as I can and let my actions speak for themselves," he said. "I love people and I won't shy away from a conversation. I care about my teammates and really like being there for guys and encouraging them."

The Flames open their 2015-16 season this Friday at 7 p.m. against the Potomac Patriots Junior "A" team in the Prince William Ice Center, webcast live on crossicefeed.com.