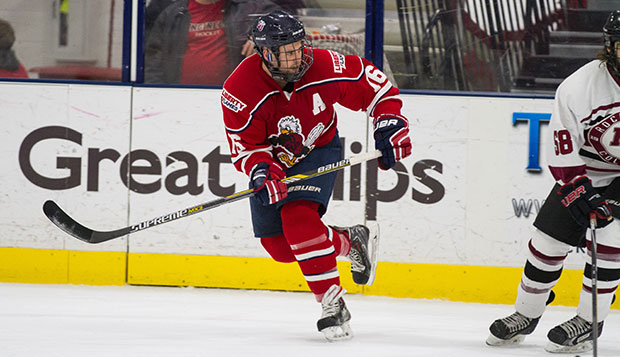 Lindsay LeBlanc, who ranked first in ACHA Division I with 50 assists as a senior for the Flames, will get a shot to play in the same league as last season's linemate Luke Hannon.

There, the scrappy forward was invited to participate in the main team camp for the Huntsville (Alabama) Havoc, set to start Oct. 14 in advance of the team's Oct. 16 exhibition game against the Columbus (Ga.) Cottonmouths, the same opponent it will travel to play in its Oct. 23 season opener.

"In order to make it to main camp, I had to compete against 19 other guys," said LeBlanc, who was notified by phone on Monday morning that the Havoc had selected him to try out. "Huntsville currently has four forwards under contract, which leaves six spots open for 10-11 guys. This will give me a good opportunity to make the team. I want to get down to Alabama as soon as possible in order to get accustomed to the new area and start preparing."

LeBlanc, an alternate captain for the Flames last season, ranked third in ACHA Division I in scoring with 66 points and led the league in assists with 50.

The SPHL is the same league Luke Hannon — LeBlanc's linemate last season at Liberty who ranked second among the ACHA Division I scoring leaders — will be playing in this year, only for the Pensacola Ice Flyers.

"I would like to thank the Huntsville Havoc and Coach Glen Detulleo for giving me an opportunity to attend camp and battle for a spot on the team," said LeBlanc, who served as membership manager of Liberty's Varsity Club this summer. "I look forward to the challenges ahead and the chance to continue playing the sport I love at the professional level."

Detulleo was the ACHL DI player of the year in his final season with the Iowa State Cyclones in 2000 before playing overseas and with minor league affiliates of the Vancouver Canucks.