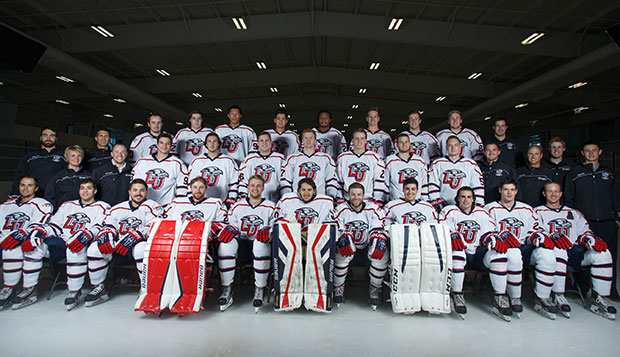 Though Liberty University's ACHA Division I men's hockey team lost its top three scorers from last year, Head Coach Kirk Handy has reloaded his offensive lines and is confident they will be just as productive across the board this season.

"The nice part is all 15 forwards we have are solid and that creates a great opportunity for us to have different combinations," Handy said, noting seven of the Flames' 10 incoming freshmen are forwards.

Depth is a strength throughout the lineup, and even on the bench, for Liberty, which tips off its 2015-16 season next Friday at 7 p.m. against the Potomac Patriots Junior "A" program at the Prince William Ice Center in Dale City, Va.

"Three goalies, eight defensemen, and 15 forwards, so it's definitely a full lineup," Handy said. "We felt like we really needed the extra bodies, another goalie, another defenseman, and one more forward."

Besides the coaching staff, goalie is the one position where Liberty has plenty of veteran leadership, including graduate student Cary Byron, who returns for his final year of eligibility, rejoining junior Matt Pinel and sophomore Josh Halpenny.

"There's a lot of new blood in the system," Byron said. "We're excited defensively, especially, with the new corps we have coming in. A lot of guys can contribute offensively back there, too. We should have a good strong defensive corps this year."

"This year we've got a great coaching staff that will not only make our team better but make individual players better," Handy said.

Liberty opens ACHA play Oct. 2-3 at fellow Independent Minot State, which it swept in a regular-season-ending home series last season, when the Beavers were ranked No. 3 in the nation. The Flames will open play in their newly renovated LaHaye Ice Center Oct. 22-23 against Davenport in the first two games of the annual best-of-three Blue & Gray Cup.

Next Wednesday from 5-6 p.m., Liberty will host its third annual ACHA DI Preseason Show, to be webcast live from the LFSN studio at River Ridge Mall. The Flames are ranked No. 10 in the ACHA preseason poll, released on Thursday.