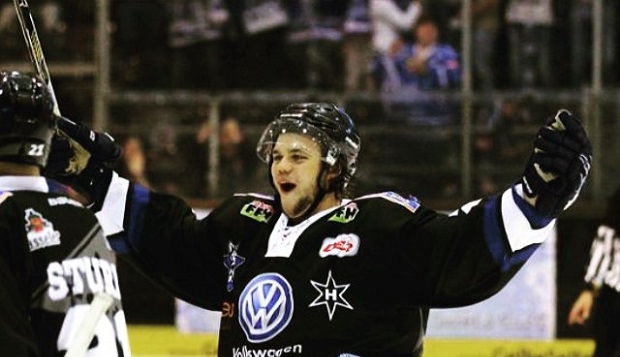 After playing his first season of professional hockey in Finland, former Liberty University ACHA Division I men's hockey defenseman Jackson Kuhn has spent the past month on three different teams in Germany, most recently the EV Landshut Cannibals.

"I played for the Kassel Huskies for two weeks, then I went to the Frankfurt Löewens organization," said Kuhn, an Ontario, Canada, native whose father's side of the family is German. "While I was there, Landshut offered me a contract I couldn't resist. I have only been there for a week but already I can tell this was a great decision and I know God opened this door for me."

Landshut is a city with a population of 80,000 located 40 minutes from Munich. The arena seats more than 6,000 people.

Kuhn has played three games in a similar role as he played in Finland last season as one of the team's top four defensemen.

"A lot of my responsibility being to produce offense while maintaining a strong defensive role as well," he said. "I am hoping to be a guy that can registrar points and to do it all. I just want to keep building my game to be an all-around defenseman."

The style of hockey in Germany is far different than the finesse game played in Finland. It is more like that he became accustomed to in the United States while playing for the Flames, earning ACHA All-American status in 2013-14.

"It is a harder hitting, cycle-the-puck style of hockey here in Germany, which is more North American than it was in Finland," Kuhn said.

Kuhn said the level of competition is high, with the captain of the Huskies having played on the German Olympic team.

"There are some seriously good players in the league," he said. "This area of Germany is responsible for most of the German hockey professionals over the last century. Landshut's last four years have been very successful and it is definitely a team to watch for in the postseason."

The Cannibals, who compete in the Oberliga league this season, returned 14 players from last season's DEL2 playoff team, forming a solid foundation to build upon.

"It's a great group of guys and our captain and one of the co-captains are former Ontario Hockey League (OHL) players from Canada," Kuhn said. "Being so far from home but having guys from Ontario makes it easy to adjust and feel comfortable in the room and on the ice."