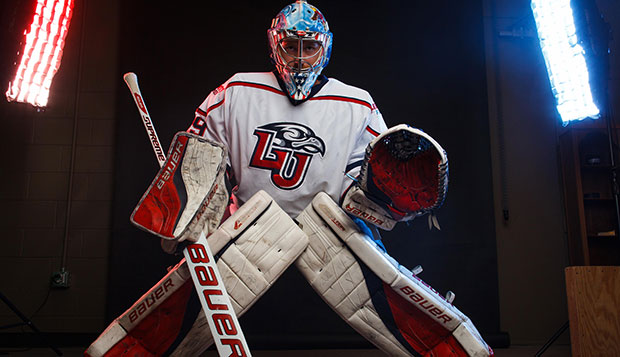 Liberty junior goalie Matt Pinel is one of three returning keepers of the cage in the Flames' ACHA Division I rotation.

A dense fog rose from the LaHaye Ice Center ice during Wednesday afternoon's media day for Liberty University's ACHA Division I men's hockey team, the result of near 90-degree temperatures outside combined with ongoing renovations that let the heat to seep into the air-conditioned rink.

The vapor created a cool effect for the portrait of a team seeking to emerge from the mist of missed opportunities in the past few postseasons and embrace a fresh slate of competition.

"Everybody's looking forward to the season and happy to get back on the ice in the new rink," Liberty senior forward Danny Logan said.

The Flames now have just two weeks to warm up for their Sept. 18 opener against the Potomac Patriots Junior "A" program at the Prince William Ice Center in Dale City, Va. In seven weeks, as cooler weather descends on Liberty Mountain, the Flames will unveil an expanded arena that ranks among the nation's nicest, and fan-friendliest, during an Oct. 23-24 Homecoming Weekend series against Davenport.

"The facility's fantastic," Liberty Head Coach Kirk Handy said. "We're really looking forward to it. It's huge and I think it will be gigantic for us."

"As players, we can't be more happy with what we've been given and what God's done here," graduate defenseman Peter Shantz added. "The facility here's incredible and what it offers now is on par with and exceeds most NCAA Division I programs. We're so blessed to have this. It's absolutely amazing. Club Sports has put a lot of work into it and the support Becki and (President) Jerry (Falwell) and (Senior Vice President for Auxiliary Services) Lee Beaumont have given the program is truly astounding."

Logan said the Flames will be eager to defend their home ice from the first two games of the best-of-three Blue & Gray Cup series against the Panthers to the regular-season-ending rematch with ACHA DI power Minot State on Feb. 19-20.

"Everybody coming into a new barn, playing in front of a packed house, we're going to be getting every team's very best, so it's important that we are prepared for each game we play here," he said.

Liberty opens its ACHA season Oct. 2-3 in Minot, North Dakota, against the rival Beavers, the only other independent team to make the national championships last season. The Flames then travel to New York for single games at Buffalo (Oct. 16) and Niagara (Oct. 17) before their highly anticipated home-opener.

On a 26-man roster that features 15 forwards, eight defensemen, and three goalies, Liberty has a healthy balance of newcomers and veterans, with 10 freshmen and eight seniors.

The Flames' greatest strength this season — aside from a coaching staff that includes two former NHL players — may be in goal, with three veterans who started the majority of Liberty's games last winter.

Cary Byron, a call-up from the Division II team last year who played when Matt Pinel and Josh Halpenny were sidelined simultaneously with injuries, returns for a final season of eligibility.

Byron, a graduate student, Pinel, a junior, and Halpenny, a sophomore, enter the season on equal footing and could all work their way into the rotation.

"The best thing about it is all of us, we push each other to get better every day," Byron said. "We all have good relationships. We're all friends and the chemistry just keeps building. We're all competitive guys. We all want to be in the net. That's a good problem, a good situation to have and it's going to help the team in the long run.

"I just have to battle every practice, keep getting better, and be a good teammate, ultimately," he added. "We're all in it to win games, so that's the end goal. Whatever role we can play, that's what we're going to do."

All three have benefited from the coaching of Dan Berthiaume, who followed an illustrious NHL career by playing seven seasons for the ECHL's Roanoke Express.

"I was really excited to come back and work with him," Byron said. "He's been a huge addition to the team and I know all the goalies have a nice relationship with him. He jokes around, he's always got a nice mood on the bench and off the bench and we learn a lot from him, too."

Liberty's defensemen are also eager to learn under the tutelage of former Philadelphia Flyers defenseman Marc-André Bourdon, 25, whose playing career was cut short by concussion.

"He obviously has a lot of good things to say and he obviously knows what he's talking about having played in the NHL," said Flames freshman Zane Schartz, who is currently paired with sophomore returning captain Ben Hughes on the back line. "He's got good information so we're just trying to soak up as much as we can."

Hughes and Shantz will anchor Liberty's defense along with junior Chase Harris and seniors Steve Bellew and Kyle Miller.

"We have a really diverse group this year on the back end," Shantz said. "We've got some big guys with some size. We've got shut-down guys. We've got some good offensive players, guys who can run the power play, so I think it's a great mix, very versatile, and a lot of guys who can play in different situations."

Offensively, the Flames lost two of the top three scorers in the league, Lindsay LeBlanc and Luke Hannon, as well as Ryley Egan, who ranked 18th. But they return their second-leading scorer from 2013-14, junior Robert Ward,  seniors Bram Erickson, Kyle Garcia, Tyson Street, and Logan, junior Grant Garvin, sophomores Paul Lamoureux and Colt Steele, and have an influx of seven freshmen.

"We lost a lot of guys up front, a lot of scoring, but I think we're going to be really deep this year," Logan said. "Every line's going to be able to contribute. We won't be as one-line dominant as we were in years past. It will give a good opportunity for the young guys coming in to really step up and contribute as well."

"The nice part is all 15 forwards are solid and we really feel like that creates a great opportunity for different combinations," Handy added. "We're going to let practices play themselves out to see where guys are at. All four lines are going to have the capability to chip in for us offensively and we feel like we've got a little more offense on the back end as well this year."

Next weekend, the Flames will participate in team-building activities at The Master's Inn, a Christian camp in nearby Altavista.

"That's the biggest thing for us is to try to find every available means to build team chemistry, with 10 new players," Handy said.

That chemistry will be key as Liberty looks to work its way up through the ACHA DI rankings and prepare to make a deeper run in the postseason, with the National Championships returning to Chicago.

"The goal's just to keep it simple and get better every day," Logan said. "Every day we show up and put in the work, on ice, off ice, in the gym, in the classroom, and we grow as hockey players, as individuals, as brothers in Christ."