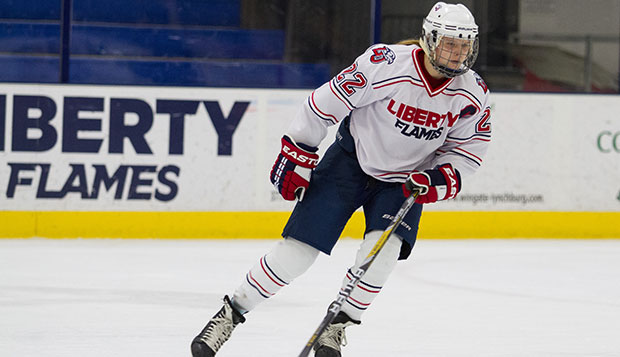 Kaitlyn Scales, one of the Lady Flames' top players on defense last season, returns as a graduate student.

Liberty University's ACHA Division II women's hockey team begins this season looking to be not only one of the more competitive teams in the East Region of the ACHA, but also in its new conference, College Hockey East (CHE).

The Lady Flames have added seven new skaters as well as two former players who took last season off.

"We are excited for the upcoming year and the depth our team has," Liberty Head Coach Sara Niemi said. "We are looking to be more competitive in our new league and hopefully make our first national tournament."

All three teams in CHE last year — Buffalo, California of Pennsylvania, and West Chester — qualified for the ACHA National Championships in York, Pa. The Lady Flames are one of three newcomers to the league along with Delaware and the Naval Academy, which dropped down from ACHA Division I.

Liberty will begin its season Oct. 10-11 at Buffalo before making its debut in the renovated LaHaye Ice Center on Oct. 31 and Nov. 1 against Cal Penn and traveling to Montclair State, a team it defeated twice last season, on Nov. 13 followed by two games at Delaware on Nov. 14-15. The Lady Flames will play the remainder of this season's schedule at home, including games against Rowan (Dec. 12-13), Navy (Jan. 23-24), and West Chester, which reached last season's ACHA DII National Championship final, on Jan. 30-31.