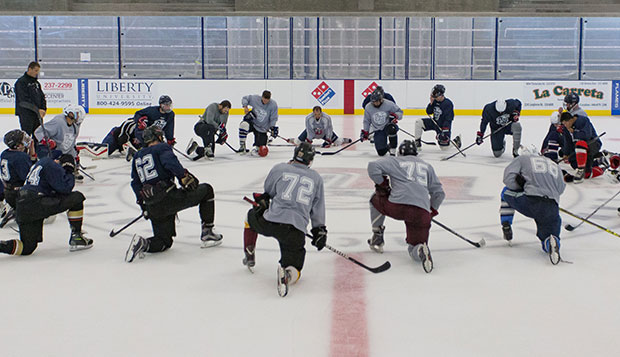 Members of Liberty's ACHA Division I men's hockey team pray around center ice following Thursday's workout at the LaHaye Ice Center, which is in the final stages of a major renovation.

Fans of Liberty University's men's and women's hockey teams still must wait two more months before the Flames and Lady Flames host their first games in the renovated and expanded LaHaye Ice Center. But players from the three men's teams and skaters from the figure skating and synchronized skating teams didn't waste any time in testing out the ice upon this week's return to campus.

"It is an exciting opportunity," Flames ACHA Division I men's hockey Head Coach Kirk Handy said. "Obviously, Darryl Glass and Glass & Associates Construction's done a fantastic job to keep that timeline working and we were able to get on the ice on time. We'll start tryouts on Monday."

"It's an exciting new era for Liberty, for the Lynchburg community, for the hockey program, that hockey's been able to stick and do well here in Lynchburg," Handy said. "There's definitely a good vibe and a good buzz around the ice rink, obviously, with the student-athletes back in town. It's neat because it's not to the point where it's anywhere near complete and there's already a lot of excitement in the air."

Liberty's DI men team will play its home opener Oct. 23 against Davenport, more than a month after opening its season at the Potomac Patriots Junior "A" team on Sept. 18.

"Our fans are already tweeting at our social media, like they're ready to go, too," Flames senior defenseman Steven Bellew said. "Just a couple of months away and we'll have probably the best fans in the ACHA."

"I'm excited to have it packed out this year," senior forward Kyle Garcia added. "We had to turn people away last year because we could only have so many people, so I think it's a big step toward making hockey even bigger at Liberty."

The expanded ice center will have a capacity of approximately 4,000 fans, with seating for 2,700 (including 560 chairbacks), 10 upper-level suites (nine of which have already sold out), and standing room to accommodate another 1,300 in the student section and around the concourse.

New features include two upper-level concession stands and a mini rink for warmups, expanded locker and training room space on the ground level, and a four-sided video scoreboard, similar to the one in the Vines Center, suspended directly above center ice.

"The scoreboard will be unbelievable, from a game atmosphere and from a fan's perspective," Handy said. "We are really, really looking forward to that. It'll be amazing, right in the center.

"From a fan experience, I'm so excited for the fans to get in here that first night," he added. "I know how excited our players are and I know how excited the students at Liberty will be, and the fans, because it's definitely an awesome environment here. It'll be enjoyable and we want our guys to enjoy the atmosphere here and to thrive in it."

Similar to the arena they will play in, Liberty's five hockey and two figure skating teams are very much a work in progress.

"Our coaching staff's spent quite a bit of time and we have a great plan in place for the next four weeks to make sure we're ready to go for the first game against Potomac," Handy said. "Monday is when the actual tryouts start and we'll have all three teams (finalized) in about two weeks."

On a DI team with seven seniors, close to a dozen newcomers will have a huge impact on the ice this season.

"The new guys are all working hard," Bellew said. "They seem to be on board with what we're trying to do here, which is win. (Monday), when tryouts really start, it's going to tell a lot about what people did over the summer and see who's ready to go."

"They were in here (Thursday) morning and they had a solid number of people," Handy said. "It was very encouraging to see."