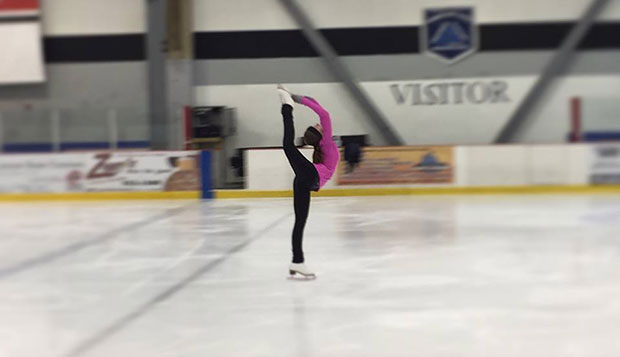 The Collegiate National Championships feature only two levels of figure skaters, juniors and seniors enrolled in college full-time. Burkhardt, who has registered for her fall classes at Liberty, was in 15th place after Friday's short program and finished 25th overall following Saturday's free skate.

The field of 39 skaters from around the country included at least a few Olympic hopefuls, including Senior Ladies champion Mirai Nagasu of the University of Colorado-Colorado Springs, who had placed fourth at the 2010 Winter Games representing Team USA.

"It was an impressive competition," said Tatiana Payne, head coach of Liberty's synchronized skating team and associate coach of its figure skating team. "The top three girls had triple-triple jump combinations and the girl that won (Nagasu) had a triple axel in her program."

Burkhardt was pleased with her short program, in which she scored a 30.55, but a bit disappointed with her 50.66 performance in the free skate, which gave her an 81.61 total.

"I believe my skill set showed quite well as I have just moved up to the senior level this year," she said. "I feel as though I can be competitive with these skaters, however I know that I have things I can work on."

Just being in the same arena as several of the top skaters in the nation made it worthwhile as she prepares to launch her collegiate career at Liberty.

"The experience was great," Burkhardt said. "I had great practice ice sessions each day and even got to share the ice with Mirai Nagasu and Max Aaron (the men's runner-up, also from Colorado-Colorado Springs). Attending collegiate nationals allowed me to experience the atmosphere of a collegiate competition. I'm looking forward to competing on behalf of LU."