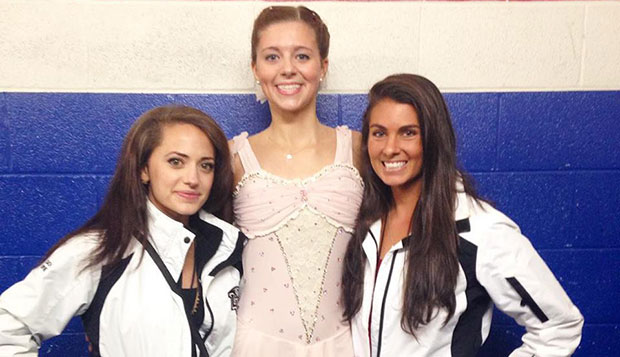 The associate director of fitness and programs at the LaHaye Recreation and Fitness Center, who spearheads the Live Healthy Liberty initiative, plans to complete her Master of Public Health degree with a concentration in Nutrition next spring.

"I'm very excited about coaching at the collegiate level," said Swyers, who enjoyed an 11-year competitive figure skating career, highlighted by a second-place showing at the Empire State Games in 2007, a fourth-place finish at the United States Figure Skating (USFSA) Collegiate Nationals in 2009, and top-10 finishes at the USFSA North Atlantic Regionals in 2008 and 2009. "I will have a lot on my plate this year, but I enjoy challenges that I know will be incredibly rewarding."

This is not Swyers' first coaching position, as she previously taught at the Syracuse Figure Skating Club in Baldwinsville, N.Y., from Jan. 2005-Dec. 2010.

"Coaches of all sports have a tremendous impact on their athletes," Swyers said. "I was blessed with an exceptional figure skating coach who influenced me in a way that went far beyond skating skills. I am honored to have a chance to give back."

Swyers received an associate's degree in nutrition and fitness management from Morrisville State (SUNY) in 2009 before transferring to Liberty for the Christian environment, and to complete her degree in Exercise Science with a Fitness Specialist concentration in 2011.

She will work with synchronized skating Head Coach Tatiana Payne, who also serves as associate coach of the figure skating team, with additional instruction from assistants John Carlow and Dawn Harter.

"There's a benefit in having four coaches," Swyers said. "We will be able to give skaters more individual attention as we continue to grow the program."

The figure skating team will hold tryouts at the expanded LaHaye Ice Center, which is currently undergoing renovations, on Aug. 20.

"We'll be really excited for that (opening of the LaHaye Ice Center)," Swyers said. "This semester will be a little challenging with the ongoing construction, but the added locker room space will be a great addition, particularly when we host events."

Payne will hold a choreography training camp Aug. 21-23 at the Main Street Arena in Charlottesville before holding tryouts at the LaHaye Ice Center on Aug. 24.