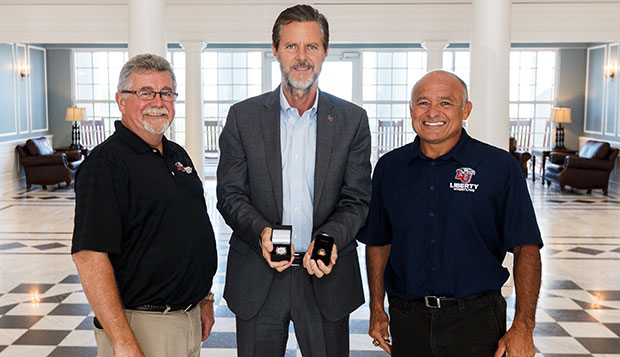 Coaches of the first two national team champions in Liberty University Club Sports history expressed their appreciation to President Jerry Falwell for his steadfast support during an informal championship ring presentation, Tuesday morning in the lobby of the Hancock Welcome Center.

Women's hockey Head Coach Paul Bloomfield and wrestling Head Coach Jesse Castro, wearing the rings given to team members and coaches of the two programs, gave Falwell his own, representing the tournament championships won by the Lady Flames and Flames, respectively, in a span of seven days this past spring.

"Without the support of the administration, this can't happen, honestly," Castro said. "Liberty's given me the tools to have success in the program, so ultimately, it stems from leadership. Jerry Falwell makes those decisions, so we're very grateful to him."

Both coaches are excited about the future of their programs and focused on defending their national championships in the 2015-16 school year.

"It was the first time we've done it, so that was exciting," Castro said of winning both the National Dual meet and National Tournament titles. "Hopefully, we can repeat that."

"It's what we've been working for," Bloomfield added. "Now, we've got to repeat, to keep our nose to the grindstone, ear to the ground, and be ready to do what we need to do."

Liberty's hockey area, the LaHaye Ice Center, is undergoing a major renovation and expansion that will transform it into one of the best on-campus facilities in the country.

"I've got friends that are coaching at NCAA Division III level and our facility is far superior, which is great," Bloomfield said. "It helps recruit, it gives us pride of ownership. It's awesome."

"I honestly think that what we have rivals an NCAA Division II school, and maybe even a low-tier Division I school, operationally," Castro said.

Bloomfield said Falwell has continued and expanded on the vision instilled by Liberty founder Jerry Falwell, Sr., who attended the dedication of the original facility in January, 2006.

"When Jerry took over from his dad (in April, 2007) there were things that needed updating and Jerry implemented all that and started the changes that have ended up where we are today," Bloomfield said. "It's good to have him part of everything going on. Everything that's gone on now is a result of where we were. Across the school, everybody's benefiting from what the school's doing for each program. You put money in, you invest in it, and people are committed and then it shows results."