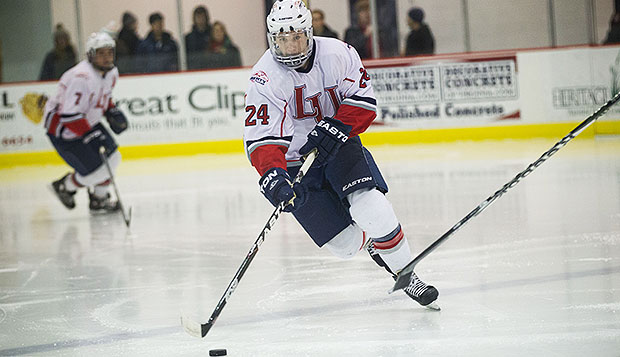 Rick Turner netted 75 points in his final season as a forward with the Flames, ranking second among ACHA Division I scorers.

One of Liberty University's most prolific scorers will take his game overseas this fall. Rick Turner, who ended his career as the Flames' fourth all-time leader in points with 159 (92 goals, 67 assists) in 108 games, signed a one-year contract with the Liege (Belgium) Bulldogs this month after completing his undergraduate degree in Sport Management in May.

Turner had his best season in 2012-13, when he ranked second in ACHA Division I with 75 points (43G, 32A) and also won the shootout contest and placed second in the fastest skater competition held before the ACHA DI All-Star game.

He prepared for his first professional opportunity in Europe this summer by competing with several professional and collegiate players in the Detroit Summer Elite League while completing his student internship. He will fly to Belgium on Sept. 3 to begin playing for Liege in the Belgium Elite League in early October. The Bulldogs won the 12-team league championship in 2014 before falling in the finals this past season.

"I expect it to be about the same level of hockey as when I was at Liberty," Turner said. "It is the top league in Belgium and is probably a pretty quick league. In Europe, hockey is more of a skill, speed, and finesse game, compared with the American game, which is a lot more powerful with more physical contact."

Liege is coached by Paul Vincent, who most recently worked as head skills instructor for the Florida Panthers in 2012-13. He served in similar capacities with the Chicago Blackhawks, which won the Stanley Cup with Vincent on staff in 2010, the Boston Bruins, Tampa Bay Lightning, and New Jersey Devils.

The team will have 22 players and Turner will be one of nine forwards, joining a few of the top scorers from last season's team.

"The players come from all over," Turner said. "There are a few guys from The Netherlands, a few from Sweden and Finland, and only a couple players actually from Belgium. For the most part, the guys are relatively young, but have played pro hockey before, so it'll be nice that I can learn the ropes from them."

Turner has never traveled overseas, only as far as Canada from his hometown of Bay City, Mich.

"I'm looking forward to the new environment very much," Turner said. "I'm exited to see what the Belgium culture is like and visiting surrounding countries on off days. A neighbor of France, located only a three-hour's drive from Paris, Belgium's primary language is French, with English a close second.

"I speak a little bit of French, enough to get by, so I don't think the transition will be too difficult," Turner said. "I'll do a lot of listening to the management and teammates and soak up all that I can. I'm looking to go in there and just fit in right away and let my play do the talking."

He anticipates continuing his career in Europe for the forseeable future.

"I'll be making just enough to get by this season, but hopefully the next year, if I play well and prove myself, a better contract will come," said Turner, who hired an agent through the Canada-based Player Placement International (PPI) Hockey Group. "What I'm looking to do is to play this year, play as well as I possibly can, and see if more opportunities in different countries come from that, maybe in Germany or Sweden."