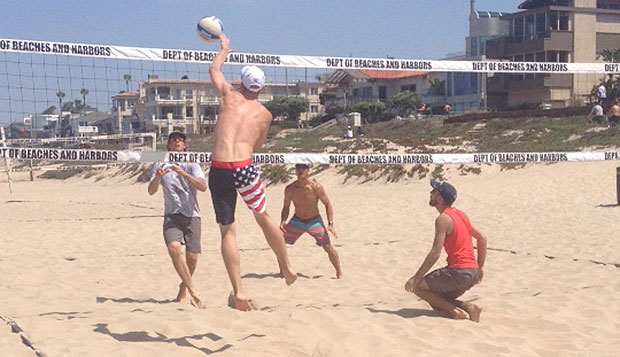 The Flames' men's tandem of graduate students Ethan Chase and Kaleb VanDePerre and Lady Flames' women's duo of rising juniors Morgan Horne and Jules Johnson both placed third out of eight teams after advancing out of their pools and reaching the semifinals of single-elimination match play.

"This was the first time in program history for our men's team to win a game and first time anyone has placed," Liberty second-year Head Coach Rachel Willis said. "We've been playing in open division tournaments, mostly against professional and semi-professional players, and that really prepared us for the higher level teams and being able to make adjustments during (tournament) play."

Horne and Johnson went 1-2 in their two-game pool play matches before winning their first playoff contest, ousting a team from Carson-Newman (Tenn.) that they had just lost to in pool play.

"To turn around and defeat them was a feeling of redemption," Willis said of the 28-22 quarterfinal triumph. "They were really excited. They were both serving well, which made a difference. They had a couple of aces apiece and they were serving to places to make it harder for their opponents to get a good pass and set. That made it difficult for them to get into their system, so they were scrambling and giving us a lot of freeballs."

Horne and Johnson wound up losing in the semifinals to Elise Zappia and Madie Smith, the eventual champions from the University of California-Los Angeles (UCLA), 28-18. They finished 2-3 overall, tying for third with a combination team from UCLA and Cal-State Northridge that they had swept in the first match of the day.

Chase and VanDePerre went 1-1-1 in pool play to advance as one of six teams out of eight to make the playoffs.

"Ethan and Kaleb did a good job of capitalizing off of errors, usually when they were serving," Willis said.
"They got several aces and put balls away. They were able to move the ball around the court and did a really good job of defending spikes and converting them into points."

Liberty's top-ranked duo defeated a team from the New Jersey Institute of Technology that had qualified by winning the New Jersey Collegiate Championship. The Flames were then swept by a pair from nearby UCLA before splitting two games against a tandem from Loyola Marymount, also located in Los Angeles.

Then in the playoffs, Liberty won its first match against a duo off Virginia Tech's indoor team, 28-23, before being eliminated in the semifinals by a second UCLA team, 28-21.

"We had seen Virginia Tech at our home tournament and again in our NCSVA regional event, and they had been out in California for training for the past month," Willis said.

Late last week, after arriving in California on Wednesday, the Flames and Lady Flames made the most of their opportunity to train with professional players — three-time U.S. Olympian Holly McPeak for the women and 2000 Olympic gold medalist Eric Fonoimoana for the men. They spent an hour each on Thursday and Friday working with them in nearby Huntington Beach prior to Saturday's tournament.

"Eric gave the men a lot of good information about working with the wind and adjusting to it, because the wind blows off the (Pacific) Ocean differently than it does off Virginia Beach," Willis said. "Working with Holly McPeak, the girls were getting a lot of good quality reps with her. I hadn't seen the girls that focused in a while."