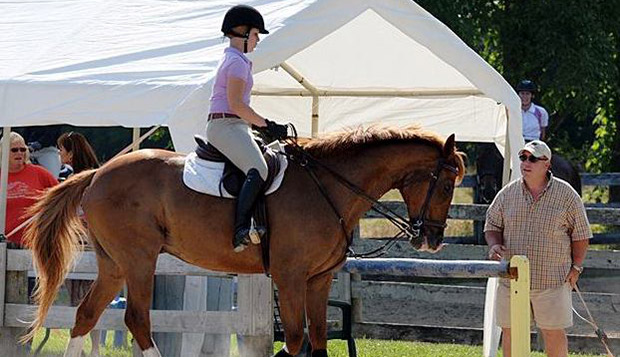 Jim Arrigon, who has a tremendous track record coaching collegiate equestrian programs in Kentucky and Ohio over the past 30 years, will move from his family's horse farm near Oxford, Ohio, to Lynchburg, Va., to serve as the new Executive Director for Liberty University's Equestrian Center.

"I've thought of going back into running a college program for several years and have been watching for the right opportunity," Arrigon said. "I applied because it's Liberty, so it's going to be something special. As I've watched Liberty develop, everything they do, they do it big and do it well."

In the two years since Liberty revived its equestrian program as a Club Sport for the fall of 2013, after breaking ground on the nearly 300-acre Equestrian Center in 2011, the program has grown by leaps and bounds.

Last summer, a second ring and an 18-stable barn were built to accommodate more student-owned horses, and men's and women's Western teams were added for the 2014-15 season. This summer, an additional 45 acres of pastureland has been cleared, providing more room for the 60-65 horses expected to board at the Equestrian Center this fall to graze.

Lee Beaumont, Liberty's senior vice president for Auxiliary Services, said Arrigon will help take the program to the next level. Starting Aug. 4, he will manage the rapidly expanding facility and oversee all aspects of the equestrian program.

"He will be actively involved with the competitive equestrian teams, the operations of the facility, new academic offerings, and proactively work with our staff and students, mentoring them to increase their knowledge base and expertise," Beaumont said.

Arrigon will also work in conjunction with Eric Brubaker, director of Liberty's kinesiology program, to develop equestrian classes starting in the spring semester, complementing the center's recreational and competitive programs.

"We want to have a robust recreational riding program that's open to students, faculty, and staff to use as part of our Live Healthy Liberty program," Beaumont said. "We want to have quality academic offerings, whether it's a judging team, riding classes, or other equine science courses. And we want to have a national championship caliber riding team."

Arrigon, the national secretary for the Intercollegiate Horse Show Association since 1991, received the prestigious "Lifetime Achievement Award" from the IHSA in 2005.

He has guided collegiate and high school riders to more than 30 team and individual national championships since 1985. Many of those came during a 15-year run at Miami University of Ohio from 1989-2005, when the Hunt Seat team garnered 11 top-six national finishes, including two NCAA National Championship Invitational crowns and three Tournament of Champions titles in his last four years.

Kirk Handy, Liberty's senior director of campus recreation, said Arrigon's level of expertise in coaching and his relationship with the IHSA will be invaluable to the staff.

"With his experience with the riding program at Miami of Ohio, in particular, and also as national secretary with the IHSA, and being involved with them as a judge, he's got a wealth of experience that will really help out up there," Handy said. "It'll be a great team."

After a successful riding career at the University of Kentucky, where he earned a bachelor's degree in animal science, Arrigon started coaching at Murray State from 1984-88, when he received a master's in equine nutrition while landing his first team and individual national titles in Western riding.

Arrigon is the only person to coach national championship teams and individual riders in the NCAA, IHSA, and Interscholastic Equestrian Association (IEA), most recently training a high school riding team out of Beckett Run Farm, which he and his wife, Gwen, have operated for the past 10 years. Simultaneously, he guided equestrian programs at Ohio State University (2005-06) and Xavier University (2006-10).

As more than 30 members of the men's and women's Hunt Seat and Western teams gear up for tryouts and competition — starting Sept. 19-20 at St. Andrews (N.C.) where his son, Matt, coaches — Arrigon is excited to see Liberty's fledgling program advance through the ranks in Regions 3 (Western) and 5 (Hunt Seat) of IHSA's Zone 4, which includes North Carolina and Virginia.

"It's a real competitive area that has produced a number of national championship teams," he said. "Being the new player, it's going to be tough going, but that's the plan, to make Liberty one of the top dogs."

Arrigon anticipates Liberty will start hosting shows in the near future with a facility upgrade that would include an indoor riding arena built over the existing ring situated between the two barns.

"It may take us a couple years to get to that point," he said. "We have a facility to build and horses to attain, but within a few years, our hope is to be able to host some championship-level events."