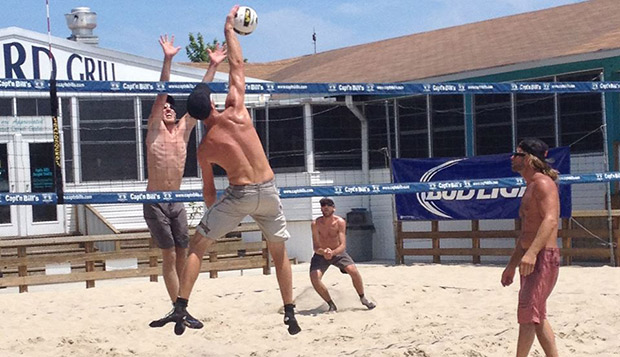 "It was the first time both of those teams had made it into the winner's bracket of the double-elimination Open Division tournament," Liberty Head Coach Rachel Willis said. "Playing in the Open Division against higher-level teams and battling point-for-point with them is going to prepare us better for nationals."

In the first round, Chase and VanDePerre defeated the duo of Jon Guida, a former AVP competitor from South Carolina, and Larry Salefsky, who runs the Wilmington Volleyball Series. Liberty's tandem lost its second-round match before winning its next two to reach the quarterfinals. The Flames' path to the championship match was blocked by a duo that included Buddy Keurig, who had competed in a national professional tournament earlier this month.

"That's a really impressive showing and a really big accomplishment playing against teams that were towering over our guys," Willis said.

Temperatures reached the mid-90s with little to no breeze off the ocean, testing the players' endurance in severe conditions.

"They played all day Saturday, starting at 8 a.m., and their last match ended after 6 p.m., so it was a long day for everybody," Willis said.

Horne and Johnson won their first best-of-three match in three games before being swept in their second match and losing a three-game decision in the third round.

"Their last match was very hard-fought," Willis said. "In the last game, which they lost, 19-17, they were battling, trading point for point. I really thought they were going to pull it out."

Liberty's other two teams who traveled to Wilmington — Steven Fawcett and Aaron Brooks for the men and Brittany Tyree and Alysha Clayton for the women— lost their first two matches and were eliminated. Fawcett and Brooks tied for 17th while Tyree and Clayton tied for 13th.

"Everybody's improving a little bit more each tournament," Willis said. "Steven and Aaron lost their first two matches but they were much closer. They've been getting a lot better and you could see it."

Horne and Johnson will once again prepare for Saturday's high-level competition by training with three-time U.S. Olympian Holly McPeak this Thursday and Friday at Manhattan Beach, Calif., where Chase and VanDePerre will work with 2000 U.S. Olympic gold medalist Eric Fonoimoana.