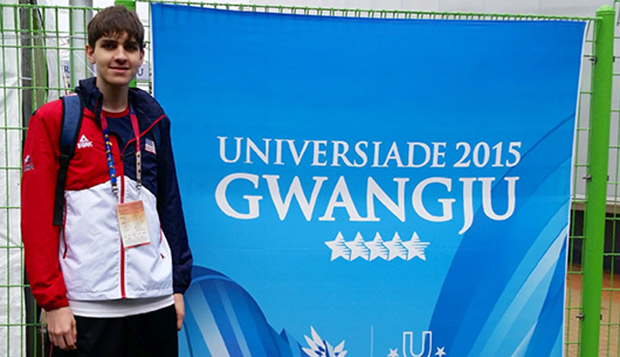 Healy, 18, qualified as one of two Liberty freshmen to claim individual gold medals at the 40th annual National Collegiate Taekwondo Association National Championships in early April at the University of Delaware. He spent 12 days in Korea as one of 21 members of Team USA who traveled from various colleges and universities around the country, training together for the first four days and taking part in the parade of athletes at the opening ceremonies before the games officially began.

It was the fourth international competition for Healy, who is pursuing a business degree through Liberty's online programs. Since picking up the sport 11 years ago, he previously competed in Taiwan, Mexico, Paraguay, and Bolivia.

"It was a good experience," said Healy, a third-degree black belt from Houston. "I learned a lot, both in tae kwon do and being out in the world. It was a really high level of competition."

Healy advanced to round 16 by defeating Angel Ramos of Chile, who withdrew from the competition. He narrowly missed advancing to the quarterfinals after being eliminated by Kazakhstan's Smaiyl Duisebay with a 3-1 decision.

"It was a very close match in the 87-kilogram weight class," Liberty Head Coach Tom Childress said. "We're proud that he made it that far and put up such a good fight."

The match that was scoreless until the closing seconds of the third and final two-minute period when Duisebay broke the tie by connecting on a three-point kick to Healy's head in the final 20 seconds.

"It was unusual for a match to go that long and for no one to score," Healy said. "My opponent's style was pretty similar to the way I fight, actually, using a lot of front-leg attacks. He just did it a little better than me. He scored the head shot first before I scored a point right as time expired."

Healy, who stayed to the end of the competition to cheer on his USA teammates who were still fighting, plans to continue his training and compete in the Pan Am Open, Aug. 7-9 in Chicago before possibly traveling to another tournament in South America. He is targeting an Olympic bid with the U.S. Team in 2020 in Tokyo after graduating from Liberty.

While Healy was in Korea, two of his Liberty teammates competed in his home state. Rising sophomore Moriah Martin and Matt Gallagher, a junior dual-enrollment student from Stafford, just missed placing at the U.S. Senior Nationals in Austin, Texas.

"Matt lost a very close match, 17-15, and Moriah made it to right before the medal rounds before she was eliminated," Childress said. "Even though they're not placing at the national level, that was a great learning experience for them. It's setting them up for Olympic experience, which is what Jonathan is really shooting for — to represent the United States at the Olympics." 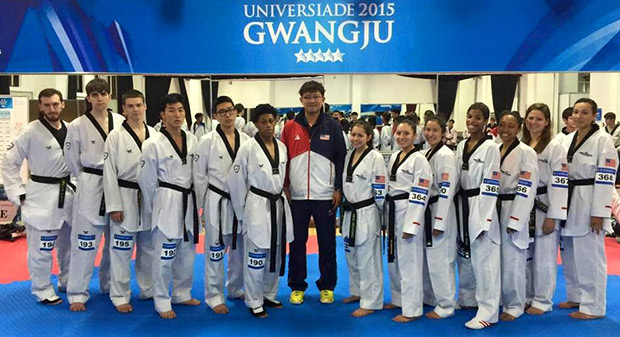