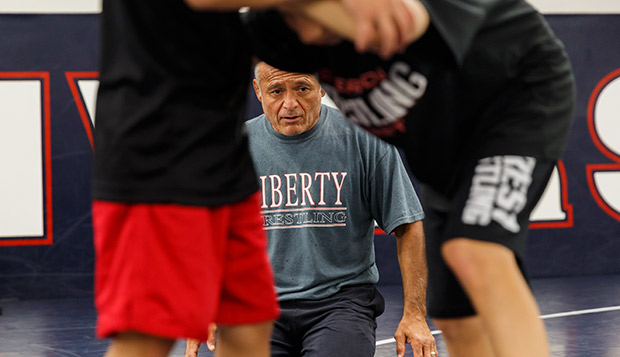 "It's a good opportunity for us to meet our freshmen and get to spend real time with them other than just observing them," Liberty Assistant Coach Allen Hackmann said. "We invite kids we know we're going to be spending a lot of time with and kind of break the ice and get to know them, to start building a relationship before we get to bark at them for an entire season."

"I was real pleased with the talent level this year," Castro said. "I am very, very excited to have these guys on board. I really liked what I saw in terms of their work ethic and personal character. I think it's going to be a great fit."

The Flames must to shore up their lineup this fall if they intend to defend their NCWA National Duals and National Tournament team titles in the spring semester.

"We're hoping we can repeat our championships from last year," Hackmann said. "It's going to take some work, but we feel confident with the guys we've got coming back and the new guys coming in that we can fill some holes from people leaving and make a run. With graduation and people transferring out and people moving up in weight, we've got shifting with the guys coming back, so all throughout our lineup we've got opportunities for people to slide in and perform."

"Those are big shoes to fill, but I'm coming in with 15 years of experience and I'm getting better every day so hopefully I can live up to the standard," said Smith, who started wrestling at the age of 5 and competed at 149 pounds as a sophomore at Ferrum last season. "I think I could be more dominant at 141 pounds, so I'm just going to cut the weight. I just want to score as many points as possible, be a team player, and contribute, to lead by example."

He plans to pursue a degree in English with teacher licensure and return to Loudoun County High School in Leesburg, Va., to teach English and coach wrestling.

Trigg participated in the camp on the return leg of a college search trip with his family from Florida. They traveled through North and South Carolina to Virginia and Tennessee and he was sold on Liberty before the week was finished.

"I've been up here on campus earlier because my parents are alumni here," said Trigg, son of former Flames linebacker Casey Trigg. "I just fell in love with the campus and I just felt like I belonged. The atmosphere here is great, it has beautiful scenery, and stands for what I believe in, so it was a good choice."

"I really enjoyed the competition, pushed myself and got a good range of where I'm at as a wrestler," said Trigg, who wants to return to Jacksonville to help develop the wrestling program at his alma mater.

Ngonga, who plans to enter the Nursing program, enjoyed the camp and the opportunity to acclimate to life at Liberty.

"It gave me a chance to work on technique and get ready for college-level wrestling," he said. "Wrestling gives me motivation to focus on my schoolwork. I'm looking forward to it. I'm trying to bulk up and hoping to become an All-American at 125 and help the team defend its national championships."

After hosting the Elementary School Camp in June and this week's Middle and High School Camp, Liberty's coaching staff will hold a "Shock and Awe" Intensive Wrestling Clinic for up to 50 competitive wrestlers in grades 6-12 from 9 a.m. to 4 p.m. on Oct. 11.