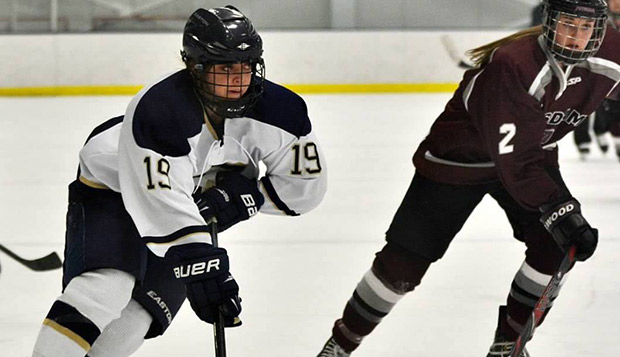 Graduation took a heavy toll on Liberty University's ACHA Division I women's hockey team, with eight seniors moving on from the program that finished 31-4-1 and captured its first national championship in York, Pa., on March 8.

Lady Flames Head Coach Paul Bloomfield has hit the recruiting trail during the offseason and has scheduled a trip to Boston to coincide with next weekend's Beantown Classic, where former goalie Chantal Lischynski will participate as part of her second round of tryouts for the expansion NWHL.

So far, with the fall semester scheduled to start in a little more than a month, he has finalized commitments from four incoming freshmen from Ontario, Canada, and one sophomore transfer from North Dakota. The class of recruits covers all areas of the ice, with two defensemen, two forwards, and one goalie.

One of Bloomfield's most prized recruits is Katie Comeau, a 5-foot, 6-inch right-shooting defenseman from Beachburg, Ontario, who played for the Ottawa Valley Thunder, a junior program.

"She is a very, very solid defenseman, a very good passer, and has a very, very strong shot," Bloomfield said. "She is active from the point and we're anticipating as she gets experience, she will score the type of goals that (sophomore forward) C.J. Tipping was getting at the end of last season."

Comeau actually committed to the program in November after visiting Liberty for College For A Weekend, getting an early glimpse of what to expect when she arrives in Lynchburg next month.

Another defenseman who will help fill the void left by graduating captain Madison Fischer and Autumn Kucharczyk is Kjrstin Hoberg, from Grand Forks, N.D., who is a 5-10 sophomore transfer from NCAA Division III SUNY at Canton (N.Y.)

"She's just an all-around steady, reliable hockey player and we're expecting her, because of her experience, to be able to step right in and be a regular," Bloomfield said. "She's 20, so she's got some maturity, and we'll look for her to provide leadership on and off the ice."

"Kelly's a good dependable goalie and she'll grow into her game," Bloomfield said. "She and Rosie will get plenty of playing time this season. (Hoberg) has good characteristics that I want in a goalie. She's a tough, strong kid. (Goalies coach) Blair (Bennett) has seen her work and he likes what he sees."

Both of Liberty's incoming freshmen forwards are Ontario natives with the same first name — Lauren McDonald, a 5-5 right or left wing with a left-handed shot from Midhurst, Ontario, who played on the Barrie Sharks' Midget AA program, and Lauren Pillisch, a 5-5 wing and hard-working all-around player who could take Nikki McCombe's spot on the third line.

"(McDonald) was a regular call-up and has experience playing at a higher level (for the Sharks)," Bloomfield said. "She has good hands and will grow into her game once she adjusts to the speed. She will be able to move the puck and serve as a set-up person more than a scorer. She's a good kid with a good heart who's not afraid to get into the corners and do the dirty work."

The Lady Flames will have more than a month of practice time together in the renovated LaHaye Ice Center before opening defense of their ACHA DI national title Sept. 26-27 in Rockville, Md., against the Washington Pride, a U19 college prep team.