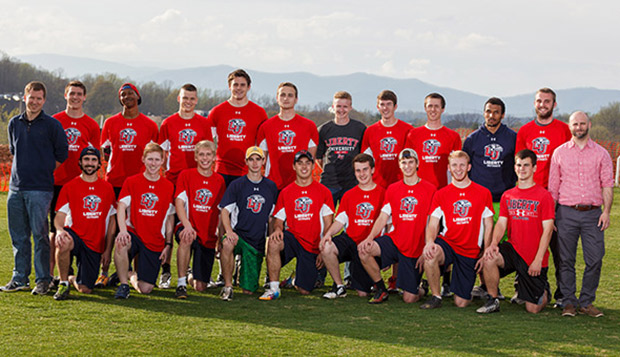 Brendan Phillips, who served alongside Jason Jarrett since Liberty University's Ultimate Frisbee program was established in 2011 and was hired as his assistant coach last fall, will take over the head coaching reins for the men's team on Aug. 1. Jonathan Mast, Jarrett's assistant coach for the women's team for the past two seasons, will assume women's head coaching duties.

Phillips, who graduated in 2003 with a degree in Social Sciences before earning his master's degree in Theological Studies this past spring, has been employed in the admissions office for Liberty's online education programs since February 2012. He was first introduced to Ultimate Frisbee in 1999 and played recreationally over the years before starting to play competitively in 2010, still participating in mixed (coed) and master's level tournaments through USA Ultimate.

"I'm very excited about coaching the team and really believe the guys have the opportunity to do very well this year," he said. "To finish in the top half of (the Virginia Conference) is a realistic expectation for this season and two or three years down the road to be competing for a spot at nationals, that's the big picture."

He plans to keep wins and losses in perspective and focus on the end goal of developing his players spiritually.

"Honestly, what excites me more than anything is having an opportunity to see what God's doing within the team and how He's growing and changing them," Phillips said. "My heart is discipleship and I see the team as the extension of what I'm doing in the local church. I love being a part of that, seeing what God is doing, because there are things they're learning in their spiritual lives that they can apply on the field. If you're put in the right direction spiritually as individuals, the results will take care of themselves."

Phillips is excited about an incoming group of five freshmen, who have played Ultimate Frisbee competitively, many from North Carolina and Georgia where the sport is offered at the high school level. He expects they will work well with returning players from last year's team, made up mostly of newcomers to the sport.

"We leaned heavily on freshmen last year, who did really well as an inexperienced group of players," Phillips said. "Last year, we only had one new player who had actually played Ultimate, but they were all very strong athletically. Now, they have the basics down and I expect them to be able to do a lot more, and be a lot more creative."

Phillips said Ultimate Frisbee trails only lacrosse as the fastest-growing sport in the United States at the youth level, "now that soccer has sort of leveled out." The sport incorporates aspects of both, as well as football.

"It's similar to soccer with the amount of running you do, and lacrosse, with a lot of the same cutting techniques used and moves we'll be doing, as well as football, with (secondary) coverage skills," he said.

The Flames featured plenty of speed as well as height at the receiver positions, but graduated two of their most experienced handlers (akin to quarterbacks on the field) from last season.

"We'll have all of our big tall guys and a lot of speed back from last year," Phillips said. "We lose Haydn Bibby and Taylor Nelson, our two main handlers from last year, but the guys returning have been working over the summer, improving their throws, looking to step up and take some of those handling responsibilities."