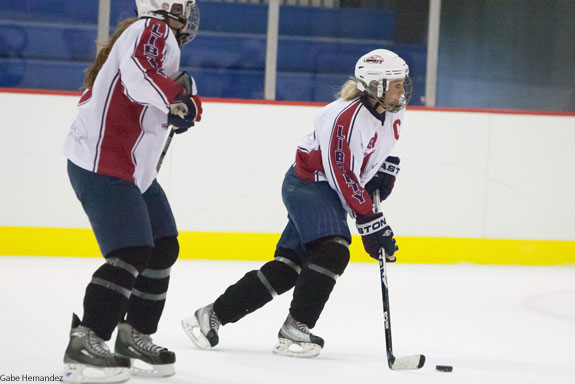 After a rocky start the Liberty University Lady Flames Division 1 hockey team found their legs and took control, topping the Hamilton Hawks of Hamilton, Ontario 5-2 Saturday night in the LaHaye Ice Center, in an exhibition game. It was the Lady Flames' first time on the ice for a game this season.

Early on the Lady Flames struggled as Hamilton found the back of the net twice in the first period to go up 2-0 before senior Stacey McCombe put one in to cut back the deficit before time would expire in the opening period.

Liberty had only been practicing as a team for one week entering this contest while the Hawks have been conditioning since May and it showed early, Lady Flames Head Coach Paul Bloomfield explained.

"There is just no chemistry yet," he said. "We've got to work on getting lines together and figuring out who works best with each other."

In the second period, senior Carly Peleshok scored the tying goal and it was all Lady Flames from there. Another Peleshok goal would put Liberty ahead 3-2 entering the third period.

"As soon as we scored that second goal, we got all the momentum, and just never looked back," said Justin Forth, Lady Flames assistant coach.

Peleshok scored twice more in the third, giving her four goals for the night.

Liberty had six assists, two from senior Laura Del Monte, and had 26 shots on goal. Hamilton finished with a pair of assists and 39 shots on goal.

Though the Lady Flames were missing both of their returning goalies, Liberty had a strong showing from two freshmen, Breanne Swart posted a shut-out and had 9 saves and Kristina Toppazzini finished with 15 saves.

"I think this was a great opportunity for the girls to get the first game under their belt, and get the jitters out, we've got eight freshman — it's good to see how they react in game situations," Bloomfield said.

The Lady Flames take the ice next on Oct. 6 in the LaHaye Ice Center against Raleigh.