Lischynski invited to next stage of NWHL tryouts near Boston 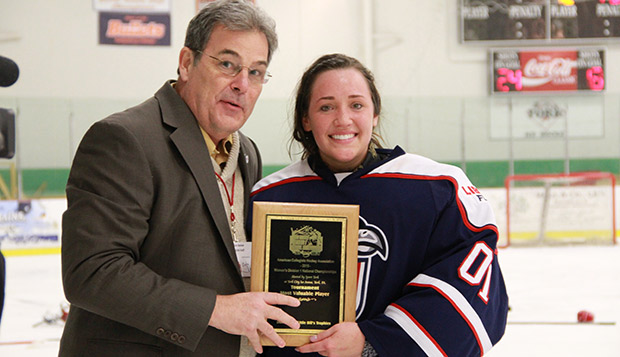 Former Liberty University goalie Chantal Lischynski was one of only three players and the only goalie from the July 6 training camp in Quebec, Canada, invited to participate in an international camp, July 23-27 near Boston, for the newly formed National Women's Hockey League (NWHL).

"It's definitely an amazing opportunity I would not have even thought possible," said Lischynski, who helped guide the Lady Flames to their first ACHA Division I National Championship in March.

The camp was directed by Gaston Gingras, who won an NHL Stanley Cup as a defenseman for the Montreal Canadiens in 1986. It was fast-paced, competitive, and intense from the start, according to the NWHL website.

"The last time I was on the ice was in March with the girls at nationals, but it only took me a couple minutes and I felt like I was right where I was back then," Lischynski said.

Lischynski will fly from her home in Arnaud, Manitoba (Canada), to Wilmington, Mass., to participate in the five-day camp, which opens with a July 23 skill session at Ristuccia Memorial Arena and concludes with team competition in the AAA Division of the Beantown Classic in nearby Boston.

"I'm excited for her," said Lady Flames Head Coach Paul Bloomfield, who was already planning to attend that tournament to recruit prospective players to Liberty. "That's great if it gives her an opportunity to get into a ground floor of a new program and take her game to the next level. She's a good goalie, she's got good size, she's strong, and right now, she's healthy. That's awesome for her."

He said Lischynski never talked about playing hockey professionally after graduating from Liberty because it was not even an option.

"This is so totally new, a brand new thing," Bloomfield said, noting this year she has the best chance to land a roster spot with all four teams needing to sign 30 players by Aug. 17. "I don't know what her competition is, or how many people they called back, but I'm excited for her. Money's not going to be the issue for her, just the opportunity to continue her playing career."

Lischynski said there are only three goalie positions left unsigned between the four teams — the Boston Pride, Buffalo Beauts, Hartford (Conn.) Whale, and New York Riveters — which will debut in the NWHL's inaugural season this winter. So she will have to make an even better impression at the international camp that will feature players from various countries, including Germany, Russia, and Japan. Among them will be goaltender Nana Fujimoto, who competed in the 2014 Olympics for the Japanese Women's National Team and the International Ice Hockey Federation (IIHF) World Championships in 2015.