Liberty summer camps train athletes to reach the Next Level 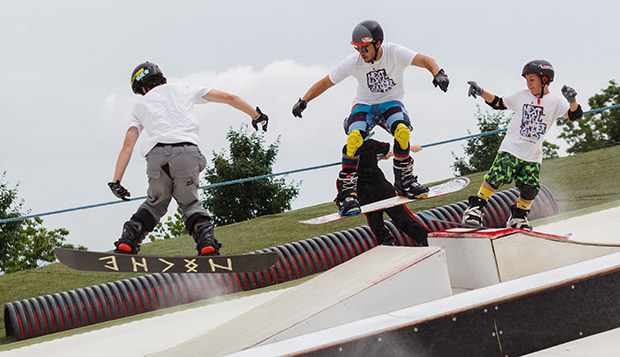 Club Sports summer camps at Liberty University have built a reputation for providing over-the-top attention and instruction to participants of all ages and experience levels, teaching fundamental skills to youth and cutting-edge techniques to advanced athletes in their respective sports.

Last week, coaches, athletes, and other Club Sports staff members directed an overnight men's lacrosse camp while the ski & snowboard and wrestling teams put on day programs to be followed by much more intensive overnight camps starting the week of July 12. Due to the ongoing renovation and expansion of the LaHaye Ice Center, the popular ice hockey and figure skating camps have been replaced by a Sports Adventure Camp set for Aug. 3-7.

Now in their fourth summer of operation at Liberty Mountain Snowflex Centre (LMSC), the Next Level Ski & Snowboard camps have raised the bar in equipping novice and expert riders alike to hit the slopes with confidence.

"There's a dozen camps out there that are doing things like what we do and we've got to match them and stay ahead of the competition," said Drew Sherwood, LMSC's general manager. "We've got to bring in great coaches and professional athletes and to create great experiences."

There is a clear line drawn between the day and overnight offerings, as indicated on the website, which warns skiers and snowboarders signing up for the Next Level overnight camps that they may be overwhelmed by the high caliber of freestyle stunts performed by counselors and campers alike.

"On the first day of camp, we'll always have all the coaches go out and evaluate the kids," Liberty Ski & Snowboard Head Coach Ryan Leeds said. "They'll have the kids do a free ride and evaluate them and based on how they're riding, we'll break them up into three different groups — beginner, intermediate, and advanced. That way, they're learning similar tricks."

In addition to 10 members of Liberty's team, the camp staff includes representatives of Skiers & Snowboarders For Christ (SFC) from chapters based in Colorado, the Pacific Northwest, and Canada.

"We have really high-level skiers and snowboarders come up that could potentially compete on the professional level one day," said Isaac Gibson, a rising senior snowboarder for the Flames.

"All of the (SFC ministry staff) that we have coming in ski or snowboard at major mountains, so they're used to seeing high quality riding," Sherwood added. "They've been coaching for years, which makes a big difference."

Day campers spend more time off than on the slopes during the heat of the day, in the LaHaye Recreation & Fitness Center pool and rock climbing wall before returning to Snowflex to jump on the aerial awareness trampoline or go tubing. They do have ample opportunity to test their skiing and snowboarding skills on the lower-level slope before daring to grab some air or ride the rails on the advanced slopes.

Liberty's Men's Lacrosse Camp is only in its second year, but the word has gotten out and interest is growing quickly as last week's event attracted 66 players, up from 27 last summer.

"It was a big jump and it's good to see," Flames Head Coach Kyle McQuillan said. "We're hoping to see this camp continue to have success and continue to grow."

McQuillan was joined by his entire coaching staff and four current players who helped run two sessions per day on the Liberty Lacrosse Field, where temperatures eclipsed 100 degrees on the artificial turf. Campers ranged in age from 9 to 18, so they were split into three age classifications — U12, U15, and U18.

"Since we've got a pretty good age range here, we do try to institute a lot of the fundamentals, working on stickwork and footwork, and we take the guys over to our gym and go over the basics of a strength and conditioning plan," McQuillan said.

Ean White, an incoming freshman long-stick defender who graduated from nearby Jefferson Forest High School in May after playing for the Lynchburg Lumberjacks, participated in the camp for the second summer in a row to get a jump start on his transition from club- to college-level lacrosse.

"Every spot is contested and I want to come and earn one," White said. "There's a lot of good players coming in, a lot of tough competition when we're scrimmaging, and everybody's pushing each other to get better and to prove themselves to Coach McQuillan. We split up offense and defense and it really helps to practice the basics and be able to learn to actually apply that stuff in a game setting."

McQuillan and his staff mix things up to keep things interesting while running the camp with military precision, sticking to a detailed itinerary.

"We do recognize it's summer camp and we want to have some fun," he added.

That included trips to Snowflex and the LaHaye rock wall as well as evening outings to hang out and cool down at nearby David's Place, equipped with a movie theatre, pool tables, and an outdoor pool.

Activities on the field ranged from three-on-three scrimmages to 33-on-33 games of dodge ball using tennis instead of lacrosse balls. Friday, the last day of camp, was designated competition day with campers winning prizes for fastest and most accurate shot contests and speed relays.

Similar to the ski & snowboarding camps, the eighth annual Liberty Flames Wrestling Camps feature a night-and-day difference between the day and overnight sessions.

"The main objective was to keep them occupied because they don't have that long of an attention span and they lose focus," Castro said of the 14 elementary school-aged wrestlers who attended.

He expects much more out of participants in the July 12-16 Middle School and High School Camp, held in the LaHaye Multipurpose Center. Though only 25 have registered so far, he is anticipating more than 50 to sign up for the intensive training camp that includes instruction from Messiah College Head Coach Bryan Brunk.

"With the high school and middle school wrestlers, we'll go into more depth," Castro said. "Their instruction is much more detailed. We'll teach series (of moves) as opposed to fundamentals, and they will have a competitive aspect to camp."

Wrestlers will be broken into four teams and compete in dual meet and individual tournaments with 10 weight classes.

The camp serves as an excellent recruiting tool for the program, with an average of three wrestlers going on to compete for the Flames each year. Hunter Faith, a two-time state runner-up from North Hagerstown, Md., and David Smith, a defending state champion heavyweight from West Virginia, are registered for this year's camp.