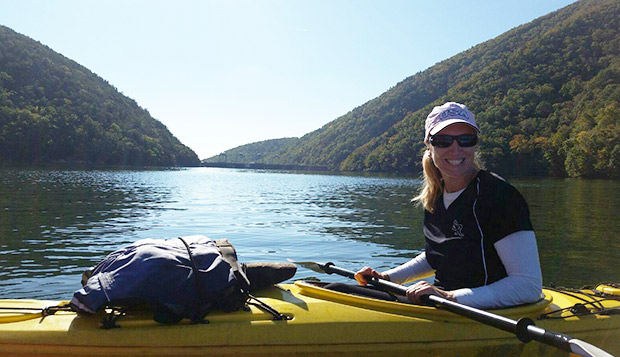 For a six-week stretch this past spring, members of Liberty University's women's crew team received valuable instruction from former NCAA Division I national champion Debbie Prowse, who put on a few technique clinics to prepare the novice rowers for competition in the SIRA and ACRA National Championships.

Prowse, who rowed for Boston University on the winning Women's Heavyweight Varsity 8 boat at the National Collegiate Championships in 1991, will take the helm of the Lady Flames' crew team this fall.

"We are so excited that she is joining us as our women's crew head coach," said Kirk Handy, Liberty's senior director of campus recreation. "Debbie will do a wonderful job building the team. In our conversations with her since she started doing these clinics, we were able to get to know her better and get an idea of her abilities and also her passion, not only for crew, but for Liberty University. It's something exciting for her, getting into coaching and back into the sport itself."

Prowse spent the past seven years as an Instructional Technology resource teacher in the Bedford County Public Schools system. She and her husband, Jeff Prowse, own Mitchell's Point Marina and RV Park, which they purchased this spring, on adjacent property to Smith Mountain Lake Boat Rentals, which they have managed since 2009. Two of their summer staff are recent Liberty graduates, Paul Brueckner off the Division III men's hockey team and Jenny MacArthur off the Division I women's team.

"Debbie and Jeff have been very accommodating to the crew team and the triathlon team in the fall," Handy said, noting they donated the use of kayaks and a pontoon boat for the swim leg of the Mid-Atlantic Region Triathlon Championships, hosted by Liberty at nearby Smith Mountain Lake State Park. "The team may have the opportunity to practice out of their marina at Smith Mountain Lake as well as Leesville Lake," where it trained last season due to dam issues at Ivy Lake, where it stores its boats.

Before her rowing career at Boston, Prowse competed for four years at Holy Spirit High School in her hometown of Absecon, N.J. This will be her first venture into coaching the sport she loves, and she is thrilled about the program's potential.

"The Women's Novice 4 did excellent at nationals and gained quite a bit of speed this spring," Prowse said. "I'm hoping all the current rowers are going to return and we'll look to get some freshmen in there and build the team. On freshman orientation day, there will be a large influx of new students and we'll be out there recruiting."

Over a span of three seasons at Boston, Prowse witnessed firsthand the revival of a program. She hopes to help steer Liberty in the right direction under her watch, with support from a men's coach who has yet to be named.