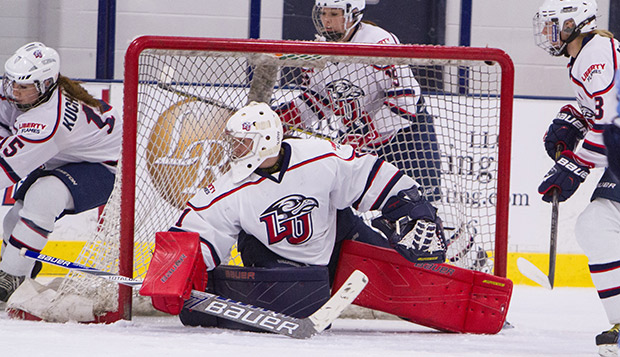 Still bubbling from the excitement of being named tournament Most Valuable Player of the ACHA Division I women's hockey National Championships, and leading the Lady Flames to their first team title, March 4-8 in York, Pa., Liberty University goalie Chantal Lischynski may not have to hang up her skates just yet.

Lischynski, who graduated in May with a degree in mathematics and plans to pursue her master's in teaching through Liberty's online education programs before going on to teach high school math, has been selected to attend the Montreal training camp for the National Women's Hockey League (NWHL) set for July 6 at the Complexe Hockey Bonaventure in Saint-Lawrence, Quebec.

"I'm pretty excited. Honestly, that would be such a dream come true," Lischynski said of potentially signing an NWHL contract. "I didn't even know it was an option, that it was possible for a female, so it's cool that they're making this opportunity available for women. If the program is successful, they would likely add more teams all over the United States and Canada."

The NWHL held its entry draft on Saturday, June 20, when each of the four teams in the newly organized league — the Boston Pride, Buffalo Beauts, New York Riveters, and Connecticut Whale — picked five founding players. The remaining players must be signed by Aug. 17 and many will come from one of five training camps this summer, with three others taking place in Toronto and one in Boston.

"This is a brand new women's professional hockey league here in the United States and Chantal being selected amongst so many is a very big and exciting accomplishment," Lady Flames Assistant Coach Jonathan Chung said.

Lischynski will be flying with all of her goalie equipment from her home in Manitoba, Canada, to Montreal, arriving at noon on July 6 before attending the 6:30 p.m. training camp and catching an 8 a.m. flight back home on July 7 to return to work as an account manager for her aunt's resort.

Scouts from all four of the NWHL teams will be on hand for the training camps. The first 45 minutes will be focused on skills assessment before the last half is devoted to a scrimmage, so she will have a short time period to make a positive impression. There will be stiff competition for her position, with the four teams likely reserving only two or three spots for goalies on their 25-player rosters.

"Most of the people that are going to be there will be top-level NCAA Division I athletes," Lischynski said. "Because I'm kind of the underdog going in, being from the ACHA, I've got to go in with some confidence. I am one of the top goalies in the ACHA and I know if I work hard, I can easily compete with these girls."

She hopes to carry some of the confidence over from her final season with the Lady Flames, when she earned first-team All-America status after posting a 10-1 record with an ACHA-best 0.99 goals-against average and five shutouts.

"It definitely should be easy to have that kind of mentality from having won nationals," Lischynski said.

Besides playing the puck, something she said the scouts will be looking for, her strengths include her composure in the cage and vocal leadership skills on the ice.

"It's important to have a goalie who's a leader on the team," Lischynski said. "I definitely filled that role at Liberty and that's something I can carry forward if I make it into the NWHL."