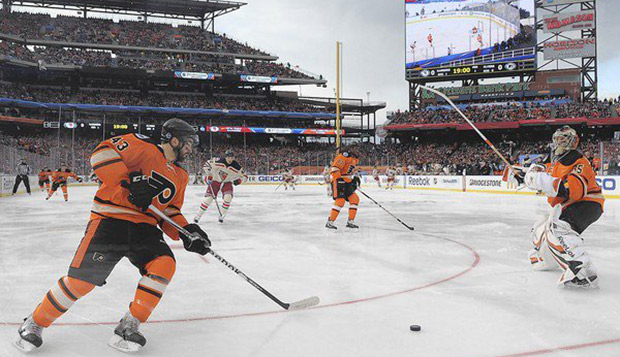 Marc-André Bourdon (left) handles the puck as a defenseman for the Philadelphia Flyers in the NHL's Winter Classic against the New York Rangers, played Jan. 2, 2012, at Citizens Bank Park in Philadelphia, home of Major League Baseball's Phillies.

His future as a player sidetracked by concussion, former Philadelphia Flyers defenseman Marc-André Bourdon is following the Lord's lead to launch his coaching career on the staff of Liberty University's ACHA Division I men's hockey team.

"A lot of guys have concussion and they just retire and can't find their way, but God has opened so many doors for me," said Bourdon, 25, who became a Christian at the end of his only season in the NHL in 2011-12.

He replaces Jake Hannon, who will serve as a Buffalo-area representative for FCA Hockey starting this fall, and joins former NHL goalie Daniel Berthiaume, who replaced Dalton Stoltz as the Flames' goalies coach last season, on a team with a wealth of experience on the bench. Associate Head Coach Jeff Boettger also played professionally in the ECHL and Kirk Handy enters his 16th season as head coach.

Connections with former Flames player Joe Smith, now working as a Hockey Ministries International (HMI) representative in the Ottawa area, helped bring Bourdon to Liberty for College For A Weekend.

"It's amazing how God provides for us, blessing us with Dan and Jeff and now Marc-André Bourdon," Handy said. "Joe Smith's dad connected us with another chaplain in HMI (David Marticorena) who knew Marc-André, and he came down to visit us in April and was interested in Liberty and furthering his education."

While beginning his collegiate coaching career, he plans to pursue studies in Exercise Science and Nutrition.

"At Liberty, I could feel God was present," Bourdon added. "I fell in love with it. Visiting the campus, it was mind-blowing. I really connected with Jeff and Kirk and liked their enthusiasm. They're really nice guys and they work hard and are dedicated to the team. It seems like it was God's plan and I'm excited for the opportunity, not only to be able to come to this school, but most of all I'm excited to be a part of such a group. There's a peace in my heart that this is a good place for me to be."

Bourdon just returned from an Alaskan fishing trip and will travel with HMI to Switzerland and the Czech Republic to help run two camps from July 18 through early August. He previously served at HMI camps in Sweden in 2012 and Switzerland in 2013.

Handy hasn't decided what area of responsibility Bourdon will have on the coaching staff, and won't decide "until we can get all four of us together on a conference call," he said.

"Marc-André has great experience at different levels, from Junior hockey to the NHL, down to the semi-pro leagues," Handy said.

Originally from Quebec, Bourdon was selected by the Flyers in the third round of the 2008 NHL Draft (67th overall) and played in the ECHL with the Greenville (N.C.) Road Warriors and in the AHL with the Adirondack (N.Y.) Phantoms before making it to Philadelphia in 2011. He returned to Adirondack after the injuries to his head and neck, but played only 24 games over the past two seasons before hanging up his skates. (Read his blog about his faith and experiences in professional hockey on HMI's website.)

"I left home when I was 16, and through professional hockey, it makes you mature quick," Bourdon said.

Handy anticipates Bourdon having a positive impact on the Flames, both as a coach in practice and on the bench and as a role model for their spiritual growth off the ice.

"Not only is he a great hockey mind, but he has a great deal of enthusiasm about working with our players and mentoring them," Handy said. "He's got a keen interest in coaching, and has experience up in Quebec working with and developing younger players. He's trying to be someone who can work with them day-in and day-out, not only improving on the ice but challenging them in their faith as well."

He is looking forward to establishing long-term relationships with Liberty's returning and incoming players.

"I never played at the university level but I played Junior hockey, so I know exactly what guys need because I lived it," Bourdon said. "I feel like that brings extra credibility and I can relate to the experiences they're going through."

He expects to learn as much if not more from Handy and the rest of the staff, all fellow Canadians.

"I'm really happy about the opportunity to grow in my faith personally," Bourdon said. "I know at Liberty there are going to be plenty of good spiritual leaders to keep going forward."