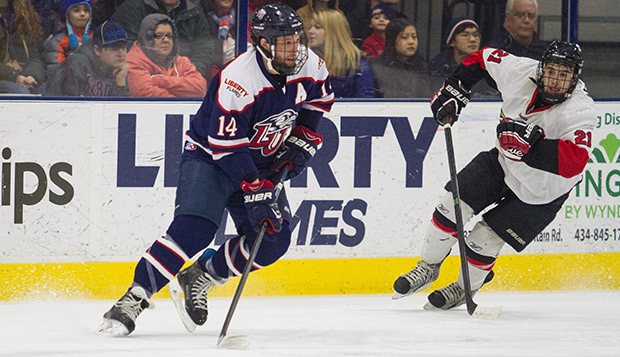 Luke Hannon, coming off a phenomenal freshman year with the Flames, will likely be a winger for the Pensacola Ice Flyers, also known as the wingmen due to the Naval Air Station based there.

Following a freshman season in which he ranked second in ACHA Division I in scoring, Liberty University forward Luke Hannon decided now is the time to launch his professional hockey career.

Hannon, 24, who scored 35 goals and distributed 40 assists for the Flames in 2014-15, despite missing six games to compete in the World University Games in Spain, signed this week to play for the Pensacola (Fla.) Ice Flyers in the Southern Professional Hockey League (SPHL).

"I didn't expect to be leaving this soon," said Hannon, who spent just one season with the Flames and was named the team's Rookie of the Year after playing Junior "A" hockey in Canada and New Jersey and in the USHL with the Waterloo (Iowa) Black Hawks. "It happened pretty quickly and God led me to go right now.

"I'm super thankful for all that I learned at Liberty," he added. "The culture here is something I'm going to bring with me down there. I will make self-improvements every day to be the best hockey player and human I can be, and to be an ambassador for Christ through the sport, if that's what He wants."

Hannon's departure comes just over a month after older brother Jake Hannon announced he will be stepping down as Liberty's assistant coach to serve as an area representative with FCA Hockey in his hometown of Buffalo.

"He's got all kinds of offensive ability as he showed when he played here," Flames Head Coach Kirk Handy said. "We're thankful he was able to come here for a year and excited to see what God's going to have in store for him in the next chapter of his life."

He realizes he is starting at the lowest level of professional hockey in the United States, but anticipates working his way up through the ranks.

"The Southern Professional Hockey League is like playing single-A baseball," Hannon said. "It's three levels below the NHL." The AHL and ECHL are considered the AAA and AA equivalents, respectively.

He was encouraged to learn that the NHL Stanley Cup champion Chicago BlackHawks' backup goalie Scott Darling formerly played in the SPHL for the Mississippi RiverKings.

"To see him hoist the Cup the other day was pretty powerful because it really makes you believe that anything's possible," Hannon said.

On a team that is only permitted to dress 16 skaters — 10 forwards and six defensemen — Hannon is eager to earn his playing time on one of the top lines upon reporting to Pensacola for training camp in October.

He is spending this summer in Buffalo working out with many of the same players he coached over the past three years through the Western New York School of Hockey.

"As opposed to training them, I'm going to be training and skating with them every day and bringing the Christian element back to Buffalo this summer," Hannon said.

He said Liberty is producing more and more professional players, with former Flames defensemen Scott Morongell spending the past two seasons with the Danbury Whalers and Jackson Kuhn signing with a professional team in Finland last winter.

Hannon wouldn't be surprised if former linemate Lindsay LeBlanc, the team MVP and third-leading scorer in ACHA DI last season, who is fulfilling an internship with the Varsity Club this summer before completing his degree at Liberty, follows him to Florida this fall, though he has other tryouts set up in Canada and Sweden.

He is confident the Flames will continue to thrive offensively without last year's top two scoring threats in the lineup.

"God's got His hand on the program and I trust whoever's lacing up the skates is going to do the best they can," Hannon said. "With Kirk (Handy) and (Associate Head Coach) Jeff (Boettger) and (Assistant Coach) Dan Berthiaume on the bench, guys will be put in the right situations to score those timely goals. There might be a new look on the power play, but with players like Luke Simon coming back, who's capable of being a top-five scorer in the ACHA, the team will do well."