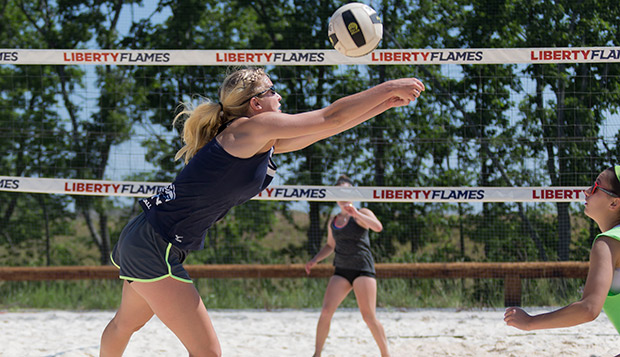 Carly Lagerquist (left) and Lady Flames teammate Carol Bertholino, shown competing at the May 30 Liberty Open, placed fifth in the A division of the June 6 tournament in Virginia Beach.

Chase and VanDePerre eliminated fellow Liberty graduate Steven Fawcett and rising junior Aaron Brooks in the second match of the double-elimination men's open division before winning their quarterfinal match and losing to the eventual champions in the semifinal round. Those two Flames pairs had tied for 13th and 17th, respectively, out of 21 open division teams in Virginia Beach.

In the women's A division bracket in Raleigh, Stotmeister and Santos earned a second-place finish in only their second tournament together, falling in the final after eliminating Lady Flames teammates Lagerquist and Bertholino in the playoff opener.

"It's been really exciting to see how much they improve from one week to the next," Willis said of Stotmeister and Santos. "Emily and Cris were especially good at identifying their opponents' tendencies and, when in system, capitalizing on them."

Johnson and Horne and rising junior Brittany Tyree and rising senior Elissa Mulcahy tied for fifth place in women's open play after winning matches in pool play before being eliminated early in the playoffs.

"We will be focusing on improving our efficiency, consistency, and composure over the next several weeks going into our last three tournaments in July," Willis said. "Confidence plays a key role in winning matches at these higher levels, and the more times we play this level of volleyball, the better our teams will perform as they begin to understand how to make plays and win points against tougher opponents."

Liberty returns to Virginia Beach for another Big Money tournament on July 11-12.