Flames will travel to Potomac for exhibition game Sept. 18 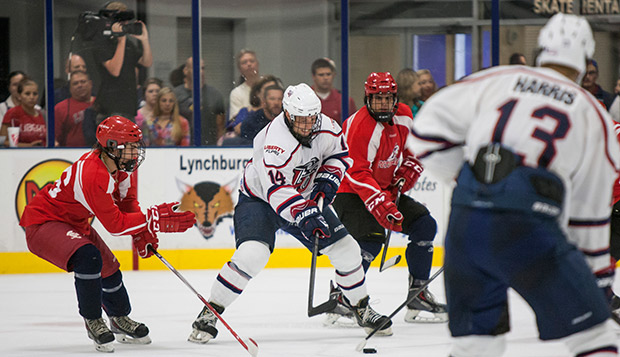 Two weeks before opening ACHA play at Minot State and more than a month before hosting its first game in the renovated LaHaye Ice Center, Liberty University's Division I men's hockey team will travel to Dale City, Va., on Sept. 18 for an exhibition game against the Potomac Junior "A" Patriots.

"This will be a great opportunity for us to play a quality game against a junior team, to use as a measuring stick to see how we are progressing before we start ACHA play in October," Flames Head Coach Kirk Handy said.

The game, set to start at 7 p.m. at the Prince William Ice Center, will be webcast live on www.fasthockey.com.

Liberty opened last season with a 7-2 victory over Potomac played before a sellout crowd at the LaHaye Ice Center. The Flames will open a new era in the expanded arena on Oct. 23-24, when they host Davenport in the first two games of the fourth annual Blue & Gray Cup.